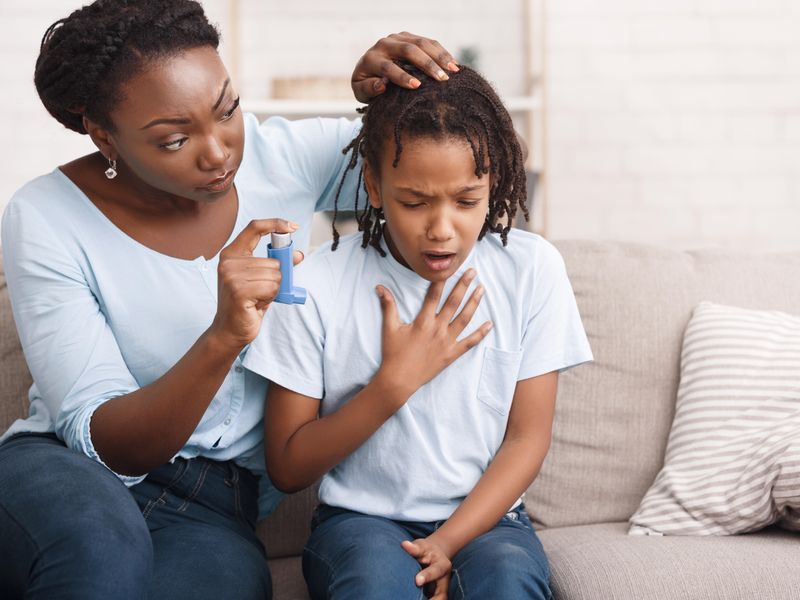 Children with hard-to-control asthma may get relief from adding an injectable antibody drug to their standard treatment, a clinical trial has found.

The drug, called dupilumab (Dupixent), has been available for several years to treat stubborn asthma in adults and teenagers. Based on the new findings, the U.S. Food and Drug Administration recently gave it the green light for children aged 6 to 11.

The drug, which is injected every two weeks, was shown to cut severe asthma attacks and improve kids' lung function over one year.

It's not a replacement for standard inhaler medications, researchers said, and it's only for certain kids.

"This is intended for patients for whom standard therapy is not meeting their needs," said lead researcher Dr. Leonard Bacharier, professor and chairman of pediatrics at Vanderbilt University Medical Center in Nashville, Tenn.

Childhood asthma often responds well to standard "controller" medications, Bacharier said. But, he added, a "substantial portion" of kids continue to have asthma attacks, miss school and even land in the hospital due to severe symptoms.

Dupilumab is one of several effective -- and highly expensive -- monoclonal antibodies approved in recent years for managing such cases of severe asthma. The drugs are lab-engineered antibodies that target particular immune-system substances involved in generating asthma symptoms.

People with asthma all have similar symptoms -- including shortness of breath, cough and chest tightness. But the disease actually has numerous forms, based on the underlying biology, said Dr. Michael Wechsler, an asthma specialist who was not involved in the trial.

On a broad level, Wechsler said, asthma is divided into two groups: type 2 and non-type 2. Type 2 is marked by a systemic allergic response that triggers inflammation. An estimated two-thirds of people with asthma have type 2 inflammation, according to Wechsler, who directs the Cohen Family Asthma Institute at National Jewish Health in Denver.

The kids in the current trial had type 2 inflammation, which was assessed by measuring certain markers in their blood.

"Dupilumab is very effective in the subgroup of asthma patients with type 2 inflammation," Wechsler said.

The study -- published Dec. 9 in the New England Journal of Medicine -- was funded by Dupixent's makers, Sanofi and Regeneron Pharmaceuticals.

It included 408 children aged 6 to 11 whose asthma was uncontrolled despite standard inhaler medication for preventing symptom attacks.

The children were randomly assigned to add either dupilumab or a placebo to their usual treatment. The medication injections were given every two weeks -- at first by a health care provider, and then at home if families were comfortable with it, Bacharier said.

The drug also improved kids' overall lung function, and cut their need for oral steroids, which can impair growth and bone development.

Wechsler said that children with severe asthma are at risk of abnormal lung development, which later in life can raise their odds of lung diseases like emphysema. So improving asthma control in kids this age is especially critical, he said.

A big obstacle in the real world, though, is cost. Monoclonal antibody drugs carry a hefty price tag, and dupilumab's can be as high as $45,000 a year.

Bacharier said insurers generally make coverage decisions on a case-by-case basis. So families would need to have their child thoroughly evaluated by a specialist to see whether dupilumab, or a different monoclonal antibody, is appropriate.

A limitation of the current study, Wechsler said, is that most patients were white -- a characteristic of many clinical trials in medicine. Yet in the United States, Black children have a particularly high rate of asthma, including severe asthma. And in his own research, Wechsler has found that Black children can respond differently to standard asthma medications, compared with white kids.

He said it's likely that the current findings extend to Black children, too -- but ideally, trials with more children of color should be done.

Bacharier agreed. "We really do need studies of these underrepresented populations to understand the clinical efficacy of these treatments," he said.

The American Academy of Allergy, Asthma & Immunology has more on monoclonal antibodies for asthma.