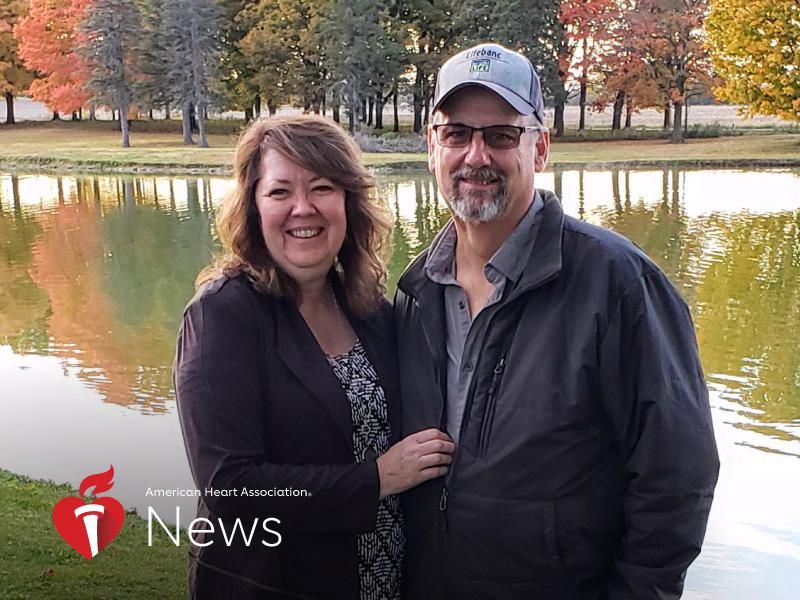 AHA News: He Went for Knee Surgery and Wound Up Getting a New Heart

Just before Mike Wigal was put under for arthroscopic knee surgery, the anesthesiologist stopped the procedure. He needed to check something he saw on a heart monitor.

After the procedure, the orthopedic surgeon told Wigal that he hadn't found anything wrong inside the knee.

"However, we've made you an appointment with a cardiologist," the doctor said, explaining that the medical team had detected an abnormal heart rhythm.

Wigal was 38 and worked the swing shift at a factory. He and his wife, Kathy, stayed busy with their two teenage boys, school sports, 4-H and church activities in Wooster, Ohio.

Sometimes Mike felt fatigued, but who wouldn't, he figured.

Still, that abnormal rhythm required further evaluation. The doctor ordered a cardiac catheterization procedure, telling Wigal that the likeliest problem would be a blockage that would need a stent and the least likely would be heart disease.

After the procedure, the doctor delivered the news.

Wigal had cardiomyopathy, a type of heart disease.

"Your heart is already enlarged and working at 35%," the doctor said. "The only thing we can do is give you medication and the only cure would be a heart transplant down the road."

Wigal went numb. Neither he nor his wife knew anyone who'd gotten a heart transplant.

"That seemed like something out of the movies," Kathy said.

For the next several years, Wigal felt fine, although his endurance continued to decline. He eventually stopped working and went on disability.

In 2007, more than seven years after the cardiomyopathy diagnosis, his local doctor transferred Wigal's care to a cardiac hospital in Columbus, Ohio. The following year, doctors said it was time to do a workup to consider him for the transplant list.

"They check you inside and out, from the tip of your head to the tips of your toes," he said.

The next day -- Valentine's Day -- Mike bought Kathy a necklace with two hearts, one larger than the other.

"This represents me," he told her. "The large one is my old heart and the small one is the new one."

While on the list, Mike answered every phone call and stayed within 90 minutes of the hospital. He and Kathy kept a packed suitcase in the trunk of their car.

Within months, Mike's energy and stamina had declined. In late November, doctors said he needed to check into the hospital.

"Be prepared to stay until you receive a heart," the doctor said.

Mike and Kathy threw together an early Christmas with immediate family, a gathering that was both joyous and somber.

After he was admitted, every day seemed to bring a new health complication.

On day six, he told the nurse he'd had enough.

"Either you pull this IV out or I will because I'm going home," he told her.

"You're not going home because we have an operating room reserved for you tonight to get a new heart," she told him.

Kathy, who had never left Mike's side in the hospital, dropped to the floor in tears.

"I thought I was going to faint," Kathy said. "We were all laughing and so excited."

About six months later -- after going through cardiac rehab -- Mike felt his strength return and felt better than he had in more than a decade.

For a while, he and Kathy attended a support group for heart transplant survivors, but it was at the hospital -- which meant about an hour and a half drive each day. So Mike had the idea of a weekend gathering in Ohio Amish country for survivors and their partners to talk and socialize. That started in 2011 with about 20 people. It's since grown to some 80 people.

Mike learned his donor was a 21-year-old man. He wrote to the family via Donate Life, a nonprofit that promotes and coordinates transplants.

"Writing that first letter was the hardest thing I've had to do," Mike said. "Knowing my donor was a young man who had a full life ahead of him, that's really difficult."

Each year, he and Kathy sent updates about Mike's health and family photos. They kept writing even though they heard nothing in return.

Six years after his transplant, Mike received a letter from the mother of the donor. She said her son's organs had saved five lives.

"Your letters and cards bring us much comfort and joy," she wrote. "My son lives through all you, and for that I am forever grateful."

Mike treasures the original letter so much that he keeps it locked in a safe. He reads from a copy when speaking to groups as an ambassador of Donate Life.

His message: If you haven't thought about donating your organs, please do. And if you have, please make sure your family knows your wishes.

Mike, who now has six granddaughters, will celebrate the 12th anniversary of his new heart in December.

He and Kathy say he's a changed man, more caring and emotional.

"We lived such a fast-paced life," Kathy said. "Now we cherish the little things and each other more."