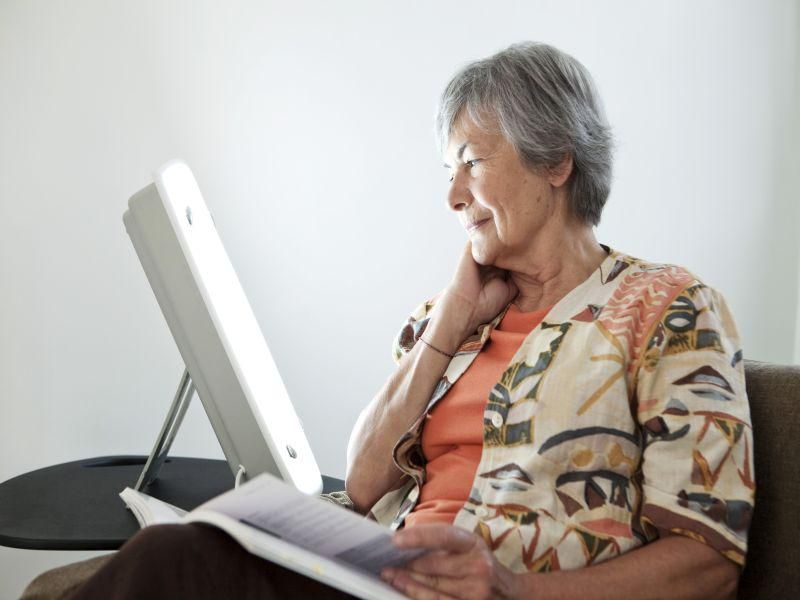 A popular treatment for the seasonal depression that strikes during dark winter months may also benefit veterans with traumatic brain injuries and post-traumatic stress disorder, a small pilot study suggests.

Results from 16 older veterans found that bright light therapy alongside traditional treatments for these problems improved physical and mental symptoms.

The therapy, in which participants sat in front of a device called a lightbox that mimics outdoor light, may help by altering brain chemicals involved in sleep and mood, according to researchers at Oregon Health & Science University (OHSU) and the VA Portland Health Care System.

"We kind of take a top-down approach in terms of we're trying to improve sleep, and by way of or through increased sleep, also show that we can also improve cognitive function, depression, symptom severity elsewhere," said study co-author Jonathan Elliott, an assistant professor of neurology at OHSU, in Portland.

Participants in the study suffered brain injuries long ago and were being treated for problems with thinking and remembering. All but two also had post-traumatic stress disorder (PTSD), a mental health condition triggered by a past trauma. PTSD is common among military veterans, especially those with brain injuries.

Half received CRT alone, while the other half also spent an hour each morning for eight weeks in front of a lightbox. The lightbox sessions were done within two hours of waking.

Veterans who used the lightbox said their thinking, sleep and mood had improved, while those on CRT alone reported no such gains. The researchers noted the outcomes were subjective, based on veterans' self-reported answers on questionnaires.

Elliott said it's not clear whether light therapy played a direct role improving all of the measures investigated. It may be that exposure to the bright light in the morning led to better sleep, which then boosted participants' mood and thinking skills, he said.

Dr. Raymond Lam, a professor of psychiatry at the University of British Columbia in Vancouver, Canada, reviewed the preliminary findings.

Noting that the only well-established use of light therapy is as depression treatment, Lam suggested that the bright light might have eased depression among participants, leading to the reported gains.

"The more depressed you are, the more cognitive complaints that you have because there's a recognized association between depression and cognition," he said.

Lam noted that the preliminary findings don't indicate how much depression the group had at the outset, although depression is associated with traumatic brain injury.

While he called this novel use for light therapy interesting, Lam said much more extensive research is needed to support these findings.

He also pointed out that the average age of the study participants was 65 to 70 years old. Veterans in this age group might have thinking, memory and mood problems related to their age, such as dementia, rather than their history of brain injury. These could affect the study outcome, Lam said.

Study co-author Elliott said his team would like to double or triple the size of the study group before publishing their findings. They are seeking a grant to fund a full-scale clinical trial.

One advantage of light therapy is that a person receiving it can do other things at the same time.

"You can drink your coffee, read the newspaper, or eat breakfast," said Allison Keil, a research assistant at the Portland Veterans Affairs Health Care System. "We just ask participants to stay within roughly two-feet of the lightbox and have it set to the highest setting."

Lightboxes can be costly and recommendations for use may depend on the device and its purpose, the researchers noted, so it is important to consult a medical professional for advice.

The researchers were scheduled to present their findings Tuesday at an online meeting of the American Physiological Society.

There's more about light therapy at the U.S. National Library of Medicine.