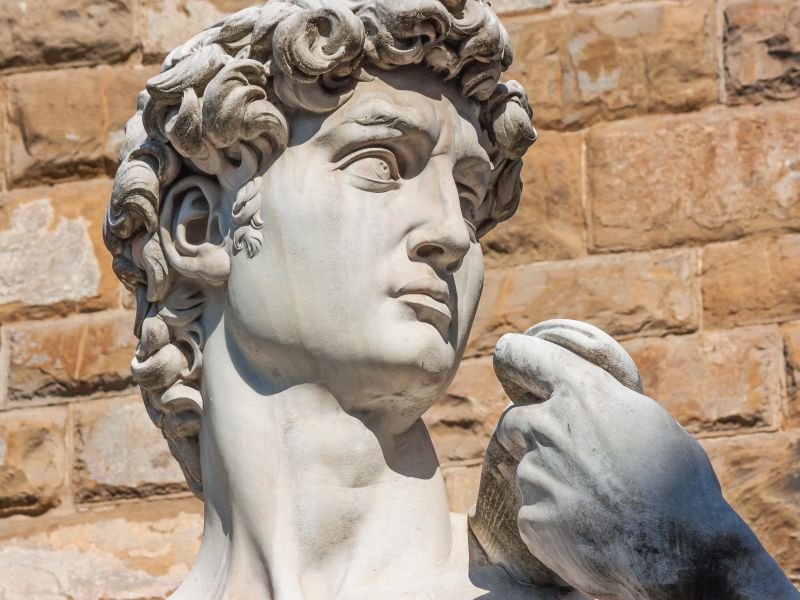 A Medical Insight in Michelangelo's David, 'Hiding in Plain Sight'

Michelangelo's David is perhaps the world's most famous statue, gazed upon by millions over centuries.

And yet it's only this year that an American doctor has spotted an anatomical insight made by the artist -- one that's passed without notice on David for more than 500 years.

In the vast majority of sculptures, and in the everyday physiology of living people, the jugular vein running from the upper torso through the neck is not visible.

But in the Renaissance masterpiece, the vessel is clearly "distended" and made visible above David's collarbone, as would occur in any healthy young man who's at a pitch of excitement about facing a potentially lethal opponent -- in this case, Goliath.

But David is young and in peak physical condition. Only in another context -- a state of temporary excitation -- does the jugular stand out in this way. David's readying for battle against a giant would, of course, fit that bill.

"Michelangelo, like some of his artistic contemporaries, had anatomical training," Gelfman wrote in a letter published Dec 26 in the journal JAMA Cardiology. "I realized that Michelangelo must have noticed temporary jugular venomous dissension in healthy individuals who are excited."

What's impressive is that this observation came to the artist more than a century before its discovery and documentation by medical science, according to Gelfman. He teaches at Marian University College of Osteopathic Medicine in Indianapolis.

"At the time the David was created, in 1504, [anatomist and physician] William Harvey had yet to describe the true mechanics of the circulatory system. This did not occur until 1628," Gelfman noted.

But Michelangelo's powers of observation were keen enough to have spotted changes in the vein's behavior on his own. In fact, this anatomical detail appears again in his sculpture of Moses at the tomb of Pope Julius II in Rome.

In that artwork, most viewers would also "agree that the sitting Moses is thought to be in an excited state," Gelfman wrote.

In contrast, the jugular vein of the recently deceased Jesus lying on his mother's lap in Michelangelo's Pieta is not distended or visible -- again, anatomically correct in that context.

"In sculpture, one can only show a single image in time," Gelfman said. And in the case of the excited, frightened David or agitated Moses, Michelangelo "must have wanted to express this [circulatory] observation in his work.

"I am amazed at his ability to recognize this finding and express it in his artwork at a time when there was such limited information in cardiovascular physiology," Gelfman wrote. "Interestingly, even today, this phenomenon is not discussed in typical cardiology textbooks."

To his knowledge, Gelfman's casual observation during his visit to Florence is the first time Michelangelo's depiction of the distended jugular has been noted in the medical literature -- even though it's been "hiding in plain sight for more than 500 years."

"It is incredible where a 500-year-old statue can depict physical findings that might be used in diagnosis," said Dr. Marcin Kowalski, who directs cardiac electrophysiology at Staten Island University Hospital in New York City. In today's era of high-tech scans and blood tests, he said, "it always amazes me where students of anatomy or medicine were able to diagnose diseases by mere observation."

For that reason, "I hope that the art of physical examination does not disappear from the repertoire of our young physicians, and medical schools continue to teach physical findings ahead of high-tech tests," Kowalski said.

He said the observation of what Gelfman calls "The David Sign" should remind doctors "of the subtleties of the clinical physical exam, how it relates to patient health [or impairment], and helps bridge the gap of how medicine is still in some instances, too, an art as well."

There's more about on how the circulatory system works at the British Heart Foundation.