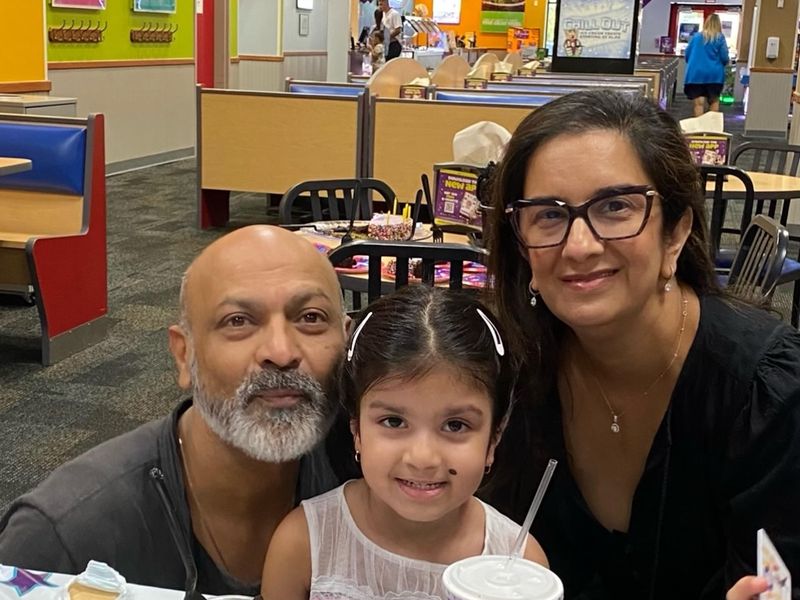 Sonia Dhaliwal knows exactly how bad childhood eczema can get.

That's because her young daughter, Ariah Khan, has struggled with a severe case of the skin condition ever since she was a baby.

Ariah's symptoms were relentless and debilitating until the age of 3. They included rashes; skin discolorations all across her face, eyelids, hands and knees, and itching so bad that "she would literally wake up screaming and crying with blood spots from scratching," Dhaliwal said.

"She was losing sleep. She wasn't eating well. She was cranky," her mom said. "And it had a big effect on her mood and personality."

"Meanwhile, her pediatrician recommended lotions at first, and then prescription medicines," the Illinois resident noted. "A lot of them. I couldn't even begin to tell you which at this point, but a lot. And they weren't helping."

Finally, Ariah found relief in a monoclonal antibody medication that a new study has found both effective and safe for children as young as 6 months.

Called dupilumab, two biotech companies, Regeneron and Sanofi, jointly developed the drug and funded the study. It's marketed under the brand name Dupixent.

The latest findings have already prompted the U.S. Food and Drug Administration to expand the approved age range for the drug, making it the first biologic approved for eczema among preschoolers.

It's a move that the researchers view as major breakthrough in the care of pediatric eczema.

"We had to make sure that the medication worked as well in young children as in adults and older children, and was just as safe," noted study author Dr. Amy Paller, chair of dermatology at Northwestern University's Feinberg School of Medicine in Chicago. "We were relieved, and not surprised, to see the same safe track record in the young children as we saw in the adults."

That's critical, said Paller, given that the majority of eczema cases begin by age 2, while 85% to 90% of cases develop by age 5.

She noted that for young children with milder eczema, "lots of moisturizer and, when the eczema is active, medicated creams and ointments -- particularly lower strengths of topical steroids -- is enough.

"But for the up to 40% of babies and preschool children with moderate to severe eczema, even stronger steroids creams and ointments are just not enough for good control," Paller added.

Desperate for drug that will work

Such was the case for Ariah. So, in the spring of 2020 her mother decided to look for a specialist, settling on the pediatric dermatology department at Northwestern.

"But that was [during] COVID," Dhaliwal said. "So, they were shut, like everyone. And we couldn't get her in until August."

When she did finally get in, she met with Paller. And Dhaliwal came prepared, "with an entire bag full of every medication we had tried since the beginning. I dumped it on the table and said, 'This is where we are with Ariah. Can you help her?'"

Almost immediately Paller brought up dupilumab. She noted that she already prescribes it to children over 6, and that it's very effective and very safe.

Oral steroids and other systemwide immune-suppressing options "have potentially serious side effects," Paller warned. In contrast, dupilumab, a once-monthly shot, "is very specific in its target, and thus does not have the [same] range of potential risks," she added.

The good news was that the medication was approved for adults in 2017 and for adolescents in 2019.

But the bad news was that at the time, the drug wasn't yet approved for younger kids, and Ariah was just 3.

Still, Paller pointed out that "there was a clinical trial going on, for kids 6 and below," Dhaliwal remembered. "I had never heard of a clinical trial, or been involved with one. And the doctor explained that it would be a six-month blind study, which meant that I wouldn't know -- and she wouldn't know -- if Ariah was getting the drug or not, which gave me pause because I wanted something now that would work."

After consulting with several doctors and friends, Dhaliwal took the plunge.

"It was a big commitment," she acknowledged, with trips to the city for doctor visits and bloodwork every three to four weeks, some of which lasted hours. But almost immediately, she knew she had made the right choice.

"Of course nobody could tell me that she was really getting the drug," Dhaliwal noted. But clearly she was, because within two weeks of Ariah's first injection, she saw an enormous change.

"I think by then her skin cleared up by about 80%," Dhaliwal said. "She was a totally different child. It was incredible."

Paller said Ariah's experience was echoed among many of the nearly 200 patients enrolled in the trial across 31 hospitals in the United States, Canada and Europe.

Among children aged 6 months to 6 years, more than half saw "at least a 75% reduction in signs of eczema, and highly significant reductions in itch, with improved sleep," Paller noted, with no major side effects.

Now, Dhaliwal is also able to do at-home injections, which are ongoing.

Ariah's skin is now "about 90% clear," she said. "And I'm paying very close attention. Maybe most people wouldn't even notice anything. And she has not had any noticeable side effects that we can see."

The findings from the trial Ariah participated in were published Sept. 17 in The Lancet journal.

Dr. Robert Kirsner, chairman of the department of dermatology and cutaneous surgery at the University of Miami's Miller School of Medicine, agreed that among standard eczema treatments "few agents work reliably and -- as in children safety is paramount -- limited options exist."

So, these findings are "welcomed news, and likely a game changer for patients, their families and for the physicians who care for them," he said.

"This is an expensive medication," Paller warned. "In the United States, this medication costs $30,000-$35,000 per year. Fortunately, most insurance will cover the medication." And as long as Ariah is enrolled in a clinical trial, her treatments are free.

The other issue is ease of use. "It's physically a hard shot to give," said Dhaliwal. "I don't love giving it. So, we're now enrolled in a new sub-study that will try out an auto-injector version of it, like an EpiPen, that's supposed to be much easier to handle."

But even if it's not, Dhaliwal says she wouldn't hesitate to recommend the treatment to any parent whose child is going through a similar ordeal.

"I would love as many kids who can benefit from it to benefit from it," she said. "I know it sounds so cheesy, but this drug really changed my daughter's life."

There's more information on eczema at the National Eczema Association.