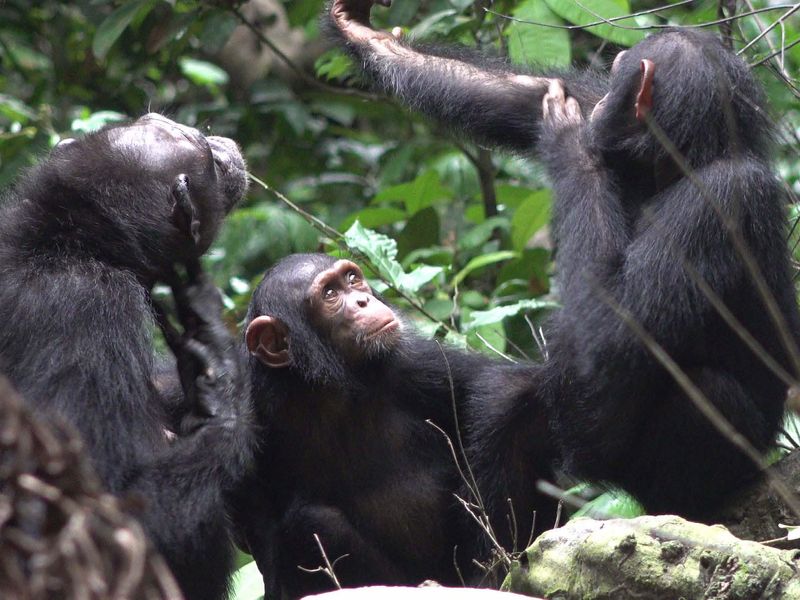 Chimpanzees aren't monkeying around when they catch insects and place them on open wounds, researchers report.

An ongoing study of about 45 chimps in Loango National Park in Gabon is the first to document via video that such "healing" behavior is occurring, according to the team from Osnabrück University in Germany and the Ozouga Chimpanzee Project. The study was published Feb. 7 in the journal Current Biology.

"In the video, you can see that [chimp] Suzee is first looking at the foot of her son, and then it's as if she is thinking, 'What could I do?' and then she looks up, sees the insect, and catches it for her son," Alessandra Mascaro, a volunteer at the Ozouga Chimpanzee Project in Gabon, said in a journal news release.

"Self-medication -- where individuals use plant-parts or non-nutritional substances to combat pathogens or parasites -- has been observed across multiple animal species including insects, reptiles, birds and mammals," cognitive biologist and project co-leader Simone Pika said in a university news release.

"Humans use many species of insect as remedies against sickness -- there have been studies showing that insects can have antibiotic, antiviral and anthelmintic functions," Pika said.

But the new research is "the first evidence that chimpanzees regularly capture insects and apply them onto open wounds," primatologist and project co-leader Tobias Deschner said in the university news release. "We now aim to investigate the potential beneficial consequences of such a surprising behavior," he said.

During a year of observation, the researchers recorded 22 events where members of this group of chimps applied insects, mostly tiny flying species, to open wounds. In most cases, the chimps used the insects on their own wounds, but there were a number of times when chimps tried to help other chimps.

Applying insects to wounds may provide anti-inflammatory or antiseptic benefits, or the behavior of this group of chimps may simply be part of their culture, in much the same way that certain treatments are unique to specific human societies, according to the researchers.

They said the next steps include identifying the insect species used by the chimps and analyzing them to determine any potential benefits in wound treatment, and also learning more about the social aspects of this behavior, including chimps teaching it to other chimps.

"It is just fascinating to see that after decades of research on wild chimpanzees, they still surprise us with unexpected new behaviors," Deschner said. "Our study shows that there is still a lot to explore and discover about our closest living relatives, and we therefore need to still put much more effort into protecting them in their natural habitat."

He added that the research sheds new light onto the origins of human behaviors. But to continue, more needs to be done to preserve primate sanctuaries and ecosystems.

For more on chimpanzees, go to the World Wildlife Fund.