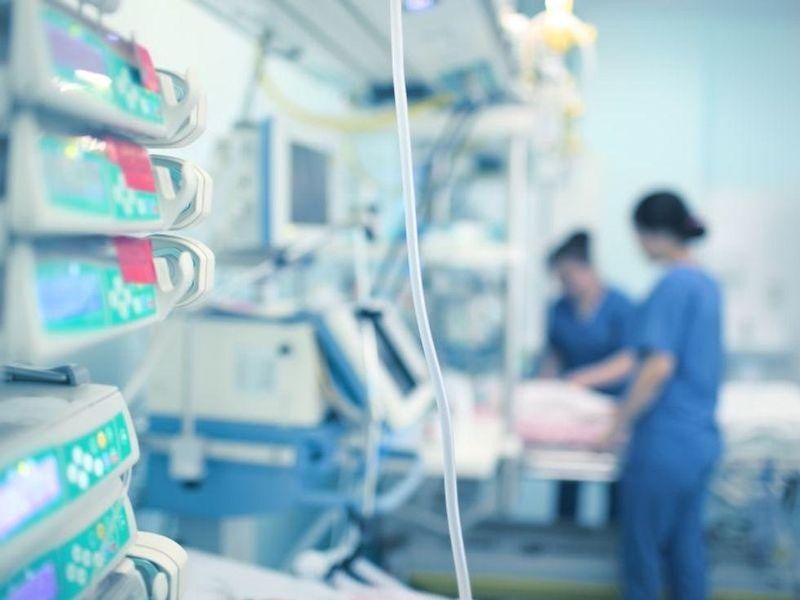 Daily Average of COVID Hospitalizations in US Hits 100,000

In another grim reminder of the toll that the pandemic continues to take on Americans, the daily average for hospitalized COVID-19 patients is now higher than any previous case surge except last winter.

As that daily average topped 100,000, coronavirus deaths have also risen to an average of more than 1,000 a day for the first time since March, The New York Times reported.

In the past two months, hospitalizations nationwide have increased by nearly 500 percent, fueled by the rapid spread of the highly infectious Delta variant and a large pool of unvaccinated Americans. Things are particularly dire across Southern states, which have some of the country's lowest vaccination rates and widespread opposition to mask mandates.

In Florida, 16,457 people are hospitalized, the most of any state, followed by Texas, according to data from the U.S. Department of Health and Human Services.

As cases and hospitalizations surged in Tennessee, the University of Tennessee Medical Center in Knoxville on Thursday requested assistance from the National Guard.

"I've never seen anything quite like it," Dr. Shannon Byrd, a pulmonologist in Knoxville, told the Times. "It's bringing whole families down and tearing families apart. They're dying in droves and leaving surviving loved ones with a lot of funerals to go to."

With the latest surge overwhelming hospitals, a nursing shortage has hindered treatment of coronavirus patients, leading to longer emergency room waiting times and rushed or inadequate care, the Times reported.

This month alone, 1 in 5 ICUs reached or exceeded 95 percent of beds full. As in earlier surges, hospitals have been forced to create makeshift ICUs in areas typically reserved for other types of care, and even set up beds in hallways or spare rooms, the Times reported. Experts say maintaining existing standards of care for the sickest patients may be difficult or impossible at hospitals with more than 95 percent ICU occupancy.

Like many health care workers, Babar is frustrated with the refusal of many residents to get inoculated, even after they had lost an unvaccinated family member to the virus.

"The families, you don't see them going out and talking about the benefits of vaccine," he said. "Nobody brings it up, nobody expresses any remorse. It's just something that they absolutely do not believe in."

Nearly half of coronavirus patients in a large, new study were still suffering at least one lingering symptom of their illness a full year after being hospitalized for COVID-19.

The latest findings add to a growing pile of evidence that suggests recovery is no easy task with this virus.

Published Thursday in The Lancet journal, the study involved just over 1,200 patients admitted to Jin Yin-tan Hospital in the pandemic's city of origin, Wuhan, China. All of the patients were discharged between Jan. 7 and May 29, 2020. Their average age was 57.

After first looking at the patients six months after hospitalization, the researchers found that while many symptoms improved over time and many of the 479 people who had been employed when they got COVID-19 had returned to work, 49 percent still struggled with at least one health problem.

Twelve months later, shortness of breath and mental health issues such as anxiety or depression were slightly more prevalent than at the six-month mark, with the reasons for that "worrying" increase unclear, the study authors noted.

Patients in the study were also compared with people in the community who had not had COVID-19 but had similar pre-existing health conditions. After 12 months, COVID survivors had worse overall health than people who had not been infected. They were also much more likely to be experiencing pain or discomfort, anxiety or depression, and mobility problems than those who had been spared a COVID-19 infection.

During the course of the study, the patients were given physical exams, lab tests and a standard measure of endurance and aerobic capacity called a six-minute walk test. They were also interviewed about their health.

While the study involved patients who were sick enough to be hospitalized, they were generally not the most severely ill. Roughly 75% required supplemental oxygen when they were hospitalized, but most did not need intensive care, ventilators or even high-flow nasal oxygen.

Women were more likely than men to struggle with mental health issues and lung problems. One of the most common symptoms was fatigue or muscle weakness, reported by 20 percent of patients. But that was a big drop from the 52 percent who reported such symptoms six months after hospitalization.

In people who were more severely ill, shortness of breath was more common, but that didn't hold true for all symptoms. One example: 244 patients underwent a lung function test that found that from six months to one year after hospitalization, there was no decrease in how many showed reduced flow of oxygen from their lungs to their bloodstream, no matter how sick they had been while infected.

An editorial that accompanied the study stressed the urgency in understanding these lingering symptoms, a condition that has been coined "long COVID" by medical experts.

"The need to understand and respond to long COVID is increasingly pressing," the editorial said. "Symptoms such as persistent fatigue, breathlessness, brain fog, and depression could debilitate many millions of people globally."

"Long COVID is a modern medical challenge of the first order," the editorial added.