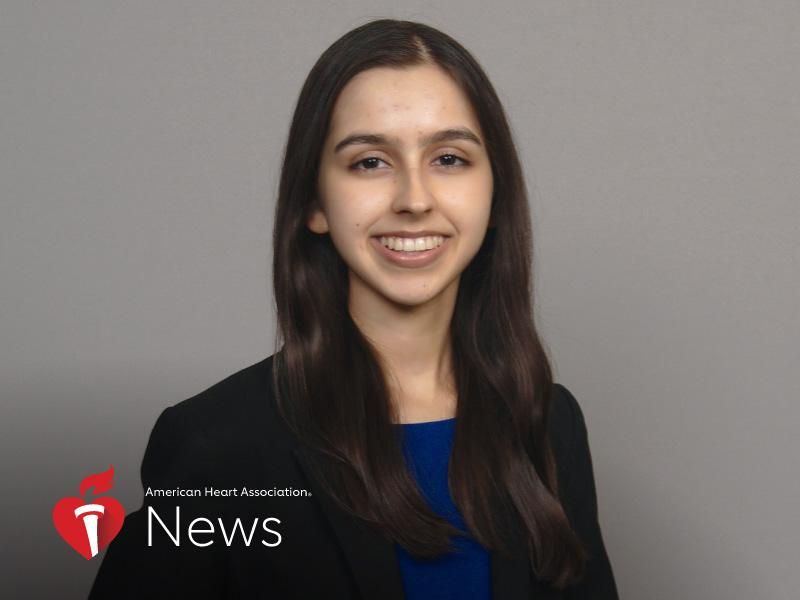 AHA News: Her Research Is Getting Worldwide Attention. But For Now, She Needs to Finish High School.

Explaining her research, Maria Balhara sounds like a typical scientist: She had a hypothesis. She recruited participants to evaluate. She analyzed the data. Soon, she'll present her work at major scientific conferences.

This might be routine stuff for a professor or graduate student. For a 16-year-old high schooler, not so much.

Balhara, a senior at Cooper City High School in South Florida, will present her work, "Proposing a New 'Gateway Food Model' for Adolescent Eating Behavior and Its Implications for Modifiable Hypertension Risk Factors," on Saturday at the American Heart Association's Hypertension Scientific Sessions in San Diego.

Her research was conceived as she thought about how "gateway" drugs can lead people to try others. She thought something similar might happen with ultra-processed food in teens' diets.

It's not the only research she'll be presenting this fall. In October, she'll appear at an American Academy of Pediatrics conference in Anaheim, California, to present another analysis from the same data set. Meanwhile, other offshoots will be featured at conferences in the U.S., Europe and Japan.

Her work had its start in her high school's AP Capstone classes, a two-year program that culminates in a research project. She continued the work while dually enrolled in a human nutrition course at Broward College.

She spent about six months designing and completing the study. The initial plan, though, did not envision all those conferences. "It was just, you know, make some sort of questionnaire or survey," then communicate it in a paper.

When she did her analyses, her father, who works as a consultant in the pharmaceutical industry, sparked the idea to submit it. She was eager to do that. "I think that a lot of times, teenagers place these restrictions on themselves, and they say, 'No one wants to read my research. No one will care.'" She hopes to help others overcome that kind of thinking, and follow in her footsteps.

Clearly driven -- and a self-described perfectionist ("I'm also a night owl, which is a bad combination") -- Balhara is poised and cheerful as she discusses how she got here. It's not like she started reading scientific journals as a child, she said. She considers herself "shockingly average," someone who enjoys classic movies -- "Back to the Future" is a favorite -- and trail hiking, when she can find time.

But it's true that she's long been fascinated with nutrition. Maybe a little obsessed.

"My friends and family tell me all the time, 'God you never shut up about food,'" she said, laughing. "I say, 'Well, it's important.'"

A lot of her interest stems, she said, from her multicultural background. Her father is from India; her mother, who wanted to be a biologist but ended up working in logistics, is from Brazil.

"Those are very different cultures, you know, very different foods," said Balhara, whose parents divorced when she was in elementary school. She was fascinated by the differences she saw in the two sides of her family -- and at school, where her lunch had things like Brazilian chicken when the kids around her were eating ham and cheese sandwiches.

So her first nutrition "research" was asking basic questions about what she was seeing. "You know, what kind of nutrients are in this food, or that food?" she said.

She also found herself thinking about how food and culture are entwined. "If you tell an Indian person who eats traditional Indian food that they have to start eating raw vegetables three times a day, they'll scoff at you," she said. "Because in Indian cuisine, vegetables are usually never eaten raw. You always have to cook them in some sort of curry." But Brazilian culture, she observed, was more open to uncooked foods.

Balhara has always had traits that set her apart, even among gifted children, said teacher Michael Jones. He teaches sociology and history at Cooper City High, but he also was her teacher in fifth grade.

Not surprisingly, he expects great things from her. "Maria is a very, very, very driven and motivated young lady," he said. "If you talk to her for more than five minutes, you'll get that sense. She has been like that since the first time I met her."

But Balhara, he said, isn't driven by external factors such as winning awards or approval from teachers. She cares about the work she's doing. The research, he said, is something she finds important, rather than just a useful way to achieve her academic goals.

She spent her summer in Boston, where she interned in a pediatric endocrine lab at Massachusetts General Hospital. Next year, she's hoping to get accepted to a university with a strong sciences program. Beyond that, she's interested in medical school and a career in research. But she's keeping her options open.

Meanwhile, Balhara hopes others might follow up on her work. And if some of those researchers are fellow teens -- so much the better, she said. "Adolescent eating habits are definitely an important subject, but it's one that adolescents themselves don't usually have the ability to contribute to in the scientific fields."