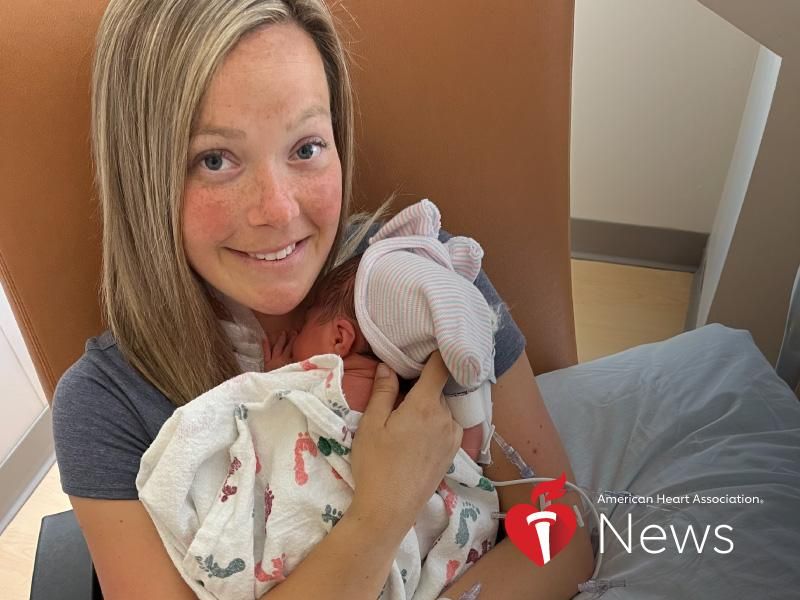 AHA News: She Thought Her Heart Problems Were Resolved -- Until She Got Pregnant

Practically from the time she figured out crawling, Kacie Nowakowski began somersaulting around her home.

Her parents, picking up on her high energy level and love of movement, enrolled her in gymnastics at age 2.

The class also checked another box. Kacie's pediatric cardiologist had suggested she go into a high-intensity sport to strengthen her heart.

Kacie was born with two heart problems: a hole that didn't close after birth (ventricular septal defect) and a condition that thickens the heart muscle, potentially making it more difficult to pump blood (hypertrophic cardiomyopathy).

By the time she was 7, Kacie was competing in gymnastics. At the height of her sport, she trained 25 hours a week. The balance beam was her favorite event.

She continued seeing her pediatric cardiologist at least once a year for checkups. Her senior year of high school, the doctor discharged her, saying she was "in the clear."

A few years later, Kacie stopped competing in gymnastics and then became a coach. In the summers, she worked with children and adults at an outdoor sports camp on the Chesapeake Bay in Maryland. For fun, she climbed rocks, snowboarded, raced mountain bikes and sailed.

In 2016, when Kacie was 24, she started feeling occasional rapid heartbeats. They lasted about 15 to 25 seconds, once or twice a day, and only when she was at rest. Sometimes she would feel faint.

At the time, her mother, Kimberly Kruger, was battling late-stage colon cancer. Kacie and her father were the primary caregivers until her mother's death in 2018.

Kacie's primary care doctor, believing the heart flutters were related to the stress of caring for her mother, prescribed medication for anxiety. Despite her medical history, diagnostic testing was not ordered.

Last year, when Kacie was 29, she and her husband, Jacob Nowakowski, a firefighter, decided to start a family. The couple, who live just north of Baltimore, were elated when she quickly became pregnant.

At her first checkup, her doctor wasn't concerned about her heart history -- until Kacie mentioned the occasional flutters. He had her wear a cardiac monitoring patch for two weeks.

Looking at the results, the doctor told her she had an abnormal heart rhythm -- and it was serious.

Her pregnancy was now considered high-risk. This meant a new doctor at a new facility. It also prompted her first echocardiogram in 13 years.

The test showed the hypertrophic cardiomyopathy she was diagnosed with at birth had worsened, thickening her heart muscle. Related to that, she had several deficiencies in her heart's left ventricle. The doctor said he was surprised she'd been able to keep up with her many high-intensity activities.

Because of Jacob's work schedule, Kacie was alone when she received the news, feeling shocked and overwhelmed. She sat on a couch in the hallway outside the doctor's office and sobbed.

Kacie was told she needed to have a battery-powered device placed under her skin to keep track of her heart rate and shock it back into a normal rhythm if needed. It's called an implantable cardioverter defibrillator.

"Without it, you're a flying trapezist without a net below you," the doctor said. "That is your lifeline."

She received it in March, when she was 22 weeks pregnant. The procedure left her with chest pain so intense that she had to sleep sitting up for more than two months. She also couldn't lift anything heavy or bathe or dress herself for two weeks.

Two months before her due date, the couple were at a birthday dinner with Kacie's father and Jacob's parents when a doctor called. He wanted to speak to both of them. They went outside the noisy restaurant.

"This is what's going to happen during delivery," the doctor said, addressing Jacob. He explained that Kacie would deliver the baby via cesarean section from inside the cardiac operating room instead of a typical birthing room. Also, she would recover in the cardiac intensive care unit.

"Your wife's heart will be challenged," the doctor said. "It will need to be a very controlled environment."

After the call, Kacie and Jacob leaned against the restaurant wall and cried.

When her father, Kurt Kruger, got the news, it washed over him at multiple levels -- the challenge she was facing now, as well as a flashback to when she was diagnosed as a baby.

He also knew she was up for the challenge. All those years of gymnastics training strengthened her mind as well as her body.

"Kacie is my little Energizer Bunny and filled with positivity," he said. "She's very regimented and always has a plan. I know that helped her."

All the planning worked out.

Madelyn Nowakowski was born on July 30. Kacie, who was sick to her stomach and disoriented after delivery, was monitored for 48 hours before getting to see her baby.

"When I first held my daughter, I felt a soothing feeling," Kacie said. "We made it. I did it for this child. My heart was stable, and she was in my arms."

Doctors detected that Madelyn has a heart murmur. They're following it closely.

As for Kacie's heart, the delivery went so well that there's talk of allowing her to turn Madelyn into a big sister.

Doctors said that while Kacie may eventually need a heart operation, it can wait a few years. That will give her time to recover from this pregnancy and, hopefully, another.

"They want to avoid any danger if I am stable and doing well," Kacie said.

In addition to waiting at least a year until considering another pregnancy, Kacie has been told to cut out vigorous exercise such as high-intensity workouts and mountain biking.

Doting on Madelyn is likely to keep her plenty busy.