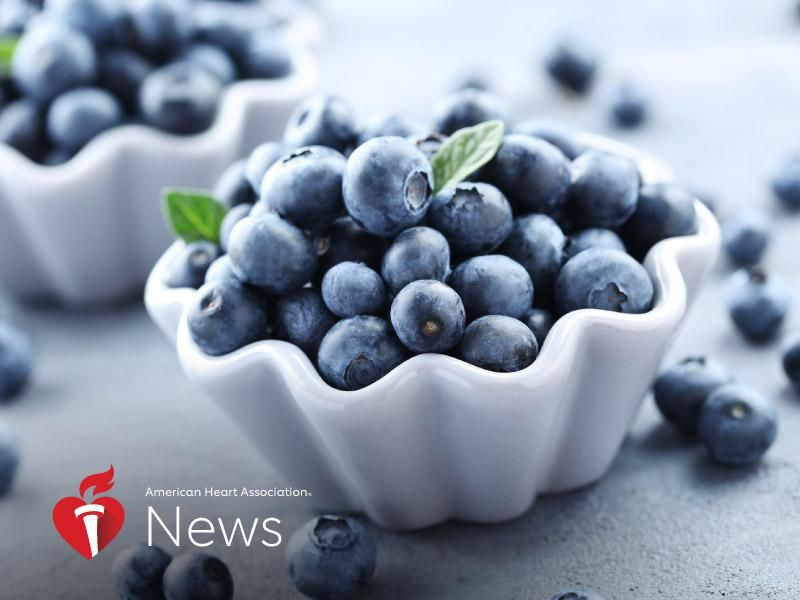 AHA News: Fresh or Frozen, Wild or Cultivated? What to Know About Blueberries and Health

Let's not beat around the bush: Blueberries are good for you.

This will come as no surprise to many Americans, who have found their thrill with blueberries in ever-rising numbers. It's easy to understand why. Not only do they taste great, but studies keep suggesting more reasons to embrace them.

"They're the kind of things we should be eating," said Eric Decker, professor of food science at the University of Massachusetts Amherst. "But sometimes these things get overpromised."

Vaguely defined terms such as "superfood" get used a lot with blueberries, whose popularity has been fueled by careful marketing. "Anytime you start talking about 'superfoods' and 'super fruits,' it's probably a little overexaggerated," Decker said.

But there's no need to start singing the blues.

If you're going to sing anything, try "Born in the U.S.A." Wild blueberries -- the tiny ones, sometimes called lowbush blueberries -- are native to North America. Cultivated, or highbush, blueberries trace their roots to New Jersey, where a farmer named Elizabeth White and a government botanist named Frederick Coville turned them into a commercial crop in 1916.

Consumption has soared in the past two decades. According to the U.S. Department of Agriculture, Americans ate more than 2 pounds of fresh blueberries per person in 2019, up from half a pound in 2003.

Blueberries are a good source of vitamin C. One cup of fresh blueberries provides 16% of a day's recommended supply for men, 19% for women. Blueberries also have abundant vitamin K and the mineral manganese.

That all comes with a mere 84 calories and a healthy 3.6 grams of fiber per cup.

Fiber, Decker said, is great for the friendly microbes living in your digestive tract. Among other things, a healthy gut microbiome can help reduce chronic inflammation, which has been linked to cancer, arthritis, diabetes and heart disease.

Fiber is not unique to blueberries. But blueberries, especially the wild variety, are unique in their levels of polyphenols, Decker said.

Polyphenols, found in plants, are micronutrients that have healthy antioxidant and anti-inflammatory properties. Other foods, such as tea or cranberries, also have high levels, Decker said. But polyphenols can taste astringent or bitter. Blueberries offer a sweeter taste but with much less natural sugar than, say, red grapes.

Blueberries are high in a type of polyphenol called anthocyanins. "The purple pigment that you're getting in a blueberry is from the anthocyanins," Decker said.

Anthocyanins have been linked to healthy gut biomes and improved cognition. Other research has linked anthocyanins to a lower risk of developing high blood pressure and a reduced risk of heart attacks.

Wild blueberries pack more anthocyanins into a smaller space than domesticated blueberries do, Decker said. But he cautioned against fixating on one or two nutrients, which probably won't dramatically change your health.

You can take your pick between fresh and frozen. Fresh highbush berries are readily available in most produce sections, but freezing fresh-picked fruit can lock in nutrients that might otherwise deteriorate.

Dried blueberries are another story. They lose only a small amount of polyphenols during processing, Decker said. But they do lose flavor. And, the USDA says, manufacturers often add sugar, oil or corn syrup during processing.

Similarly, blueberry jams and jellies may be as much as two-thirds sugar, Decker said. Blueberry pie? It adds saturated fat from the crust.

If you're going to eat something like pancakes or muffins anyway, Decker said, you can make them healthier by adding blueberries to the mix. Studies show, though, that baking lowers the level of anthocyanins.

But you can easily, and tastily, work fresh blueberries into meals as part of a salad, he said. At breakfast, toss them in your oatmeal, low-fat yogurt or whole-grain, high-fiber cereal.

Decker said he and his nutritionist friends always urge people to eat more fruits and vegetables. But "if a food doesn't taste good, people won't eat it." With blueberries, that's not a problem.

So his final judgment on whether to eat them should be music to everyone's ears: "You should."