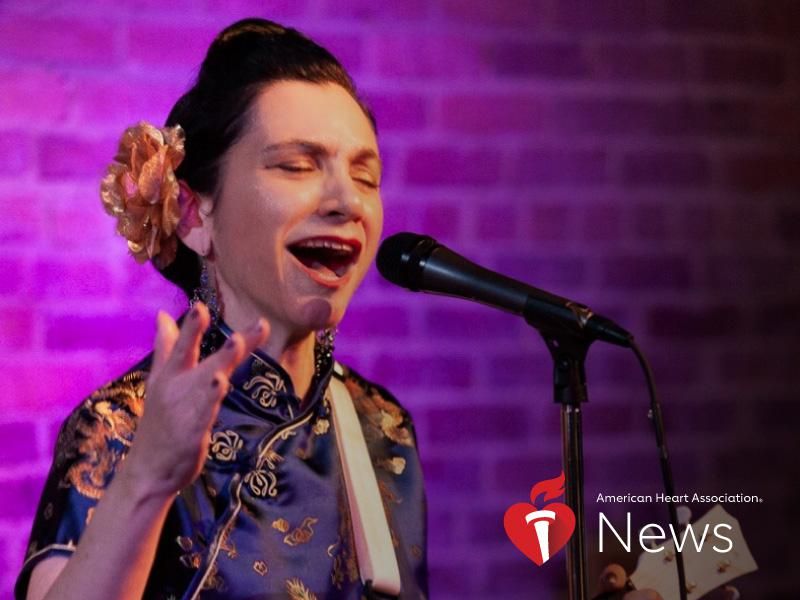 AHA News: This Lawyer-Musician Relearned How to Sing, Note by Note, After Stroke at 42

Whether presenting a closing argument to a jury as a lawyer or singing on stage as a professional musician, Valerie Giglio of Stoneham, Massachusetts, knows how to work a crowd.

"You're performing either way," she said.

When she was 42, she lost the ability to do both. All because of a sudden head turn.

The motion caused a sharp pain in her neck that persisted for several days. It bothered Giglio enough that she went to the hospital. Doctors told her it was probably a pulled muscle and sent her on her way.

The next morning, she felt dizzy and had double vision; the world was spinning. Her husband called 911. The ambulance transported her to the same local hospital she had just visited.

Still unable to definitively diagnose the cause of her symptoms, doctors transferred her to another hospital. Testing revealed a stroke caused by bleeding in her brain. Known as a hemorrhagic stroke, it was caused by a weakened vessel that ruptured. About 13% of strokes are caused by such hemorrhages. Her delayed diagnosis likely happened because strokes aren't expected among people her age and with her overall health.

"About one out of every six to seven strokes actually affects young people, but this isn't the sort of fact that is widely recognized, even by physicians," said Dr. Aneesh Singhal, a neurologist who treated her that night. "As a result, there's often a missed opportunity to give lifesaving treatments."

The longer it takes to treat the problem, the more time there is for physical problems to set in. Giglio couldn't swallow for a week. Speaking clearly was difficult, and singing was impossible. Her left side was paralyzed.

"It was like somebody had taken a pen and made a line right down the middle of my body. I was robbed of almost everything," she said. "But luckily, I had my mind."

Giglio spent a week in the hospital followed by two months at an inpatient rehabilitation facility. The magnitude of her disability became clear when during a music therapy class she struggled to bang on a cup as if it were a drum.

But she improved week by week. Walking with a cane was one of her first big milestones. Walking without one was an even bigger one. And simply opening her left hand felt like a major victory.

"I wanted my life back, and I went the extra mile," she said. "I did everything they told me to do and more."

Determined to regain her singing voice, Giglio also started working with a voice coach, relearning how to breathe properly and practicing one note at a time. "I had no tone, no vibrato, nothing that would make me a professional singer," she said.

The stroke occurred in 2014. By 2016, she felt confident enough to audition for the Berklee College of Music in Boston as a vocal principal. They offered her admission.

"That felt triumphant," she said.

It's one of Giglio's many accomplishments in the years since her stroke.

She's published a book about her stroke journey and she's advocated for legislation to improve critical care for stroke patients. Inspired by her classes at Berklee, she founded her own music publishing company to produce her own songs, a fusion of old-timey classics and electronic dance music called electro-swing.

Earlier this year, at the invitation of the American Heart Association, she performed the national anthem at a Boston Bruins NHL game. Televised to millions, it was by far her largest audience.

"It was great hearing the audience cheer when I made those high notes," she said. "Hopefully I can shatter some stereotypes about what's possible."