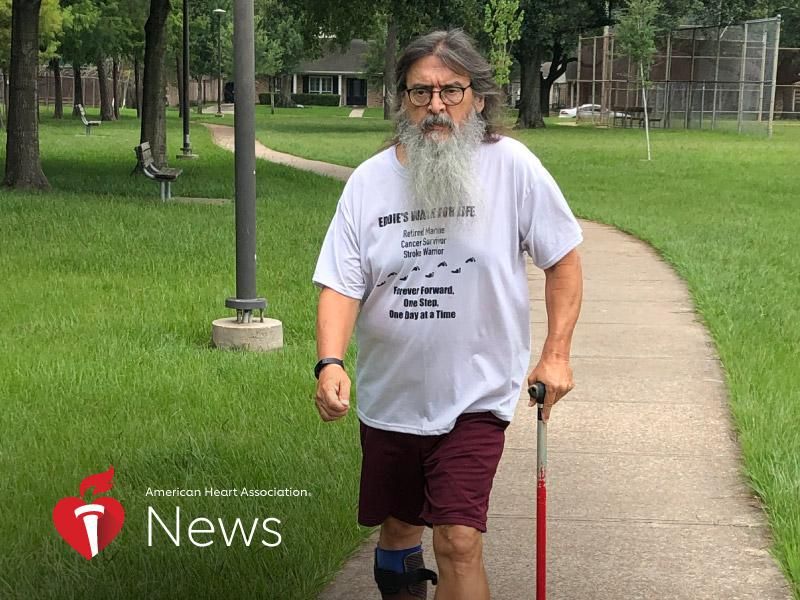 Eddie deRoulet never was the type to let others do things for him. Not in his years as a Marine and not in his subsequent career helping others. Then a stroke left him compromised on his right side.

He was forced to retire from his job and to give up his driver's license. Struggling to cope with this new concept of relying on help, and knowing the power of support groups, Eddie sought one out.

At the first meeting, a 90-year-old man in a wheelchair told Eddie, "I've had seven strokes in the last 15 years. This is what you have to look forward to."

Eddie refused to accept that.

That same day he told his wife, Janice, "Let's go to the mall to walk."

On Veteran's Day, which also is his 69th birthday, Eddie will celebrate the occasions by walking the length of a marathon (26.2 miles) around Memorial City Mall in Houston, the site of thousands of his previous miles.

Eddie spent 20 years as a personnel administrator and alcohol abuse counselor in the Marines. He was based in both Carolinas, Kansas and at Camp Pendleton Naval Hospital in California. He also served in Japan.

After retiring in 1994, he became a chemical dependency counselor and later a social worker. A good part of each day was spent in a car, driving to see clients and eating fast food along the way. He fell out of shape, gained weight and developed Type 2 diabetes. He also was treated for prostate cancer.

One day in 2016 while getting dressed for work, he felt the room spin. He assumed it was from low blood sugar and ate a banana.

When the dizziness returned, he went to the hospital.

An emergency room nurse suspected Eddie had a transient ischemic attack, or ministroke. But a CT scan showed nothing. Still, doctors had him stick around a bit.

By the time a stroke team arrived, Eddie was back to normal.

A series of tests over two days found nothing. The next morning, Eddie woke up unable to move his right arm or leg.

Another MRI showed Eddie had a pontine stroke. That means it was caused by a blood clot in the lower area of his brain called the pons. The problem resolved on its own but damaged Eddie's right side.

He spent two weeks in a rehabilitation unit, receiving physical therapy and occupational therapy. Having always been right-handed, he needed to learn how to use his left hand.

At home, Eddie walked unsteadily and fell often. Finding a new normal was difficult. That's what prompted him to join the support group.

The first time Eddie walked the mall, he lasted about 20 minutes.

He and Janice started walking almost every day. After several months, Eddie, who walks with a cane and brace on his right leg, decided to walk the entire mall. The 1.5-mile trip took him just under two hours. Now he can do it in 45 minutes.

In 2017, the year after his maiden mall-walking outing, Eddie enrolled in a study looking at whether step-counting devices motivated stroke survivors in their recovery.

For Eddie, the answer was a resounding yes. He set a goal of walking 10,000 miles in five years.

"Eddie is a good person for setting goals and wanting to meet the goals, maybe a little excessively at times," Janice said, laughing. "I do walk with him some, but nothing like what he does."

He became such a fixture at the mall that in 2019 the management organized quarterly walking and fitness events called "Eddie's Walk of Life."

"The mall management knows him, all the security guards know him," Janice said. "He loves it."

Eddie also began knitting hats as part of his church's initiative to help people experiencing homelessness. When COVID-19 stalled that project, Eddie put his energy into writing and making art.

When he began putting his own inspirational writing or others' words on paper and decorating them, he started giving them away at the coffee shop where he and Janice are regulars.

Wherever Eddie goes, people recognize him by his colorful T-shirts (often tie-dyes) and long gray beard.

With all the walking, Eddie dropped his weight from 220 pounds to 177. He's also effectively managing his diabetes. He still attends a stroke support group weekly, but he's switched to one he considers more positive.