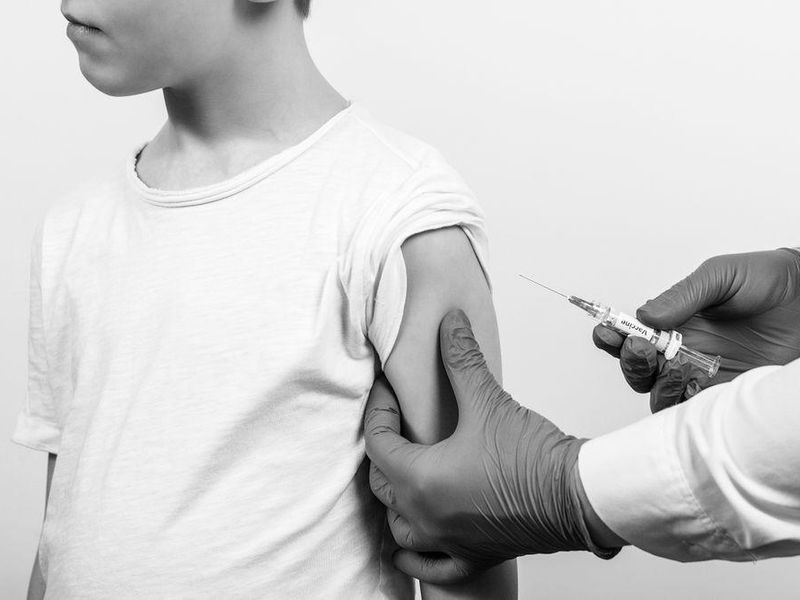 We've Been Here Before: How Polio Vaccine Rollout Saved Millions of Young Lives

An infection that can disable and kill stalks the land, but a brand-new vaccine offers hope that almost everyone, kids included, can evade it. After scientific testing, a nationwide rollout of the vaccine begins.

As the U.S. government gears up to offer COVID-19 shots to about 28 million 5- to 11-year-olds, high levels of vaccine hesitancy in some corners may make the campaign a tough sell.

But it's not the first time a nationwide effort has sought to shield American kids from a dire infectious health threat, and history offers a successful how-to.

Back in the mid-1950s, polio stalked the United States every summer, with random outbreaks occurring in one community or the next.

The killed-virus polio vaccine developed by Dr. Jonas Salk was seen as a godsend, and in 1954, frantic parents volunteered more than 1.8 million children to serve as test subjects in a yearlong field trial of the vaccine's effectiveness.

Of those kids, 600,000 would be randomly injected with three doses of the experimental polio vaccine or a placebo.

The picture contrasts starkly with today, with a large number of parents hesitating to inoculate either themselves or their children with COVID-19 vaccines that have been safely administered to more than 221 million people in the United States and nearly 3.9 billion worldwide.

"That's a really sad thing that we've gotten to in this society, that people have gotten to that level of mistrust around government and the medical field in general," said Dr. Peter Salk, Jonas Salk's son and president of the Jonas Salk Legacy Foundation.

Today's COVID-19 vaccines were developed at breakneck pace, with drug companies handed billions in government funding, using cutting-edge technology to craft the jabs and then test them in streamlined clinical trials.

The U.S. Food and Drug Administration last week approved a reduced-dose COVID vaccine for 5- to 11-year-olds based on a clinical trial involving about 4,700 kids. The U.S. Centers for Disease Control and Prevention is expected to consider the pediatric COVID vaccine this week.

"With advances in modern science and technology, we're able to get to some of these solutions much more quickly," said Stacey Stewart, president and CEO of the March of Dimes. "Clinical trials are done very differently today that still get us to the same place, being able to validate safety and efficacy of vaccines."

By contrast, polio had been a perennial and petrifying threat for decades by the time Jonas Salk had his vaccine ready for widespread testing.

"These epidemics had been going on for years and people were terrified," his son said. "There was no way of knowing when an epidemic was going to strike near you, if it was going to hit your child or someone else's child."

"And when kids were infected, they could end up paralyzed for life," he said. "They could end up in an iron lung for either a short period of time until their breathing muscles recovered or for the rest of their lives, or they could die."

Once the Salk vaccine had been proven safe in early trials involving 5,320 people -- including Salk himself, his wife and three sons -- the drums began beating hard for a massive clinical trial to test its effectiveness.

The National Foundation for Infantile Paralysis -- forerunner of the March of Dimes -- spent $7.5 million in private donations to initiate, organize and run the vaccine trial, with little participation from the federal government. That's more than $76 million in today's dollars.

There was enormous pressure to get the trial done as quickly as possible, ahead of the next polio season.

Between April 26 and July 10, 1954, volunteers distributed Salk's series of three polio shots. In all, more than 443,000 children received at least one polio inoculation, while more than 210,000 received a placebo, according to the March of Dimes.

Researchers spent the rest of 1954 following all the children, and taking blood samples from 40,000 to examine their antibody response.

'The vaccine works' -- and celebrities spread the word

The National Foundation issued a news release on April 12, 1955: "The vaccine works. It is safe, effective and potent." The clinical trials had found it 80% to 90% effective in preventing polio.

The New York Times blared the news with a banner headline:

Headlines also will follow any final decision by the CDC to make pediatric COVID vaccines available for 5- to 11-year-olds. It will be impossible to reach any kind of herd immunity without their vaccination. And kids tend to be spreaders of all kinds of germs, endangering the health of their older relatives.

But the times have changed so much that Salk and Stewart wonder how well the pediatric COVID vaccine will be embraced, compared to the polio vaccine.

"When the polio vaccine was announced, the whole country erupted in relief and excitement, but the March of Dimes still had to do a lot of work to make sure that everyone could get vaccinated, because it was something new and something everyone had to feel comfortable with," Stewart said.

The COVID-19 pediatric vaccine will have a far less celebrity-laden rollout, at least as the White House imagines it.

The Biden administration has steered clear of mass vaccinations for kids, instead setting up a system by which the jabs would be delivered in familiarsettings by people whom parents know and trust.

More than 25,000 pediatric and family doctor clinics will provide shots to kids, along with tens of thousands of pharmacies, children's hospitals and community health centers, according to the White House plan.

There's a lot less trust in government and medical expertise these days, Stewart and Salk said, fueled in part by lies and rumors spread through the internet and social media.

"We've seen the power of a lot of misinformation and how that's affected people's acceptance of the vaccine and their trust of the vaccine," Stewart said.

Still, vaccine hesitancy among parents is nothing new, Salk said.

"Opposition to vaccines goes back hundreds of years, with the smallpox vaccine," the earliest form of which was discovered in 1796, Salk said. "People were making cartoons about the horrible side effects that would come from injecting the smallpox virus and so on."

But in the current climate, some parents will likely need to hear from an expert they know personally to be swayed in favor of the COVID vaccine for their kids.

"For many parents, it's really going to come down to a lot of pediatricians individually talking to families and ensuring them that the vaccine is safe for their kids," Stewart said. "Obviously, parents trust their pediatricians on a whole range of issues relative to their kids' health. At the end of the day, it's going to be less about one major spokesperson or the president of the United States. It's probably going to come down to tens of thousands of pediatricians all around the country to give parents the comfort they need and the assuredness the vaccine is safe for their kids."

The pediatric COVID vaccine is also being introduced at a time when decades of anti-vaccine sentiment have brewed in the United States, Salk said.

"People are still carrying these fears and wanting keep their children from being immunized on a routine basis against measles and whooping cough and so on, and the kids themselves pay the price," he said. "The public also pays the price because that means disease like measles can't be eliminated in this country."

Groups like the March of Dimes will need to pitch in and combat anti-vaccine propaganda, to help promote COVID shots for kids, Stewart said.

The U.S. Food and Drug Administration has more about the pediatric COVID vaccine.