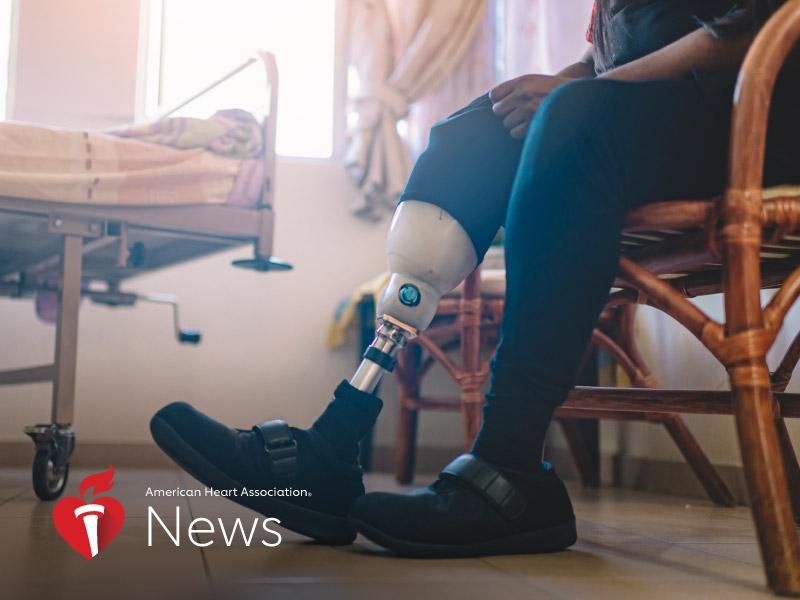 AHA News: Hispanic Adults May Be More Likely to Get Amputations for This Blood Vessel Disease

Hispanic people hospitalized for peripheral artery disease may be more likely to undergo amputations than their white peers who are not Hispanic, according to new research that points to the need for greater awareness and prevention of the condition.

Peripheral artery disease, or PAD, is a narrowing of the arteries that carry blood away from the heart. American Heart Association statistics estimate about 8.5 million U.S. adults 40 and older have the disease, which most commonly affects the legs and feet.

Caused mainly by buildup of fatty plaque in arteries, PAD often causes cramping, pain or fatigue in leg muscles when a person is climbing stairs or walking. If it's left untreated, it can lead to gangrene and amputation. It also can be a risk factor for other cardiovascular diseases, like heart attacks and strokes.

Hispanic people also had lower rates of revascularization than non-Hispanic white people (43% versus 60%), a procedure that can restore blood flow to the compromised limb surgically or through non-invasive methods.

Paulina Luna, the study's lead investigator, said research from nearly a decade ago reported similar results. "We were hoping that these disparities may have decreased with the advancement of technology and the push for revascularization, but the disparities are still pronounced. There's still a lot of work to be done."

The study was presented last month at the AHA's virtual Scientific Sessions. The findings are considered preliminary until a full paper is published in a peer-reviewed journal.

Luna said the findings might be explained in part by social barriers facing the Hispanic community, including lower rates of health insurance and healthy literacy. She said previous studies also show Hispanic patients tend to seek medical help later, when the disease has advanced, compared with non-Hispanic white patients.

The findings "highlight the need for systemic changes and public policies that advocate for insurance coverage for all patients, particularly undocumented Hispanic patients, who have a difficult time accessing health care," said Luna, who recently graduated Yale School of Medicine and is a resident physician at New York-Presbyterian Hospital/Weill Cornell Medical Center.

There are more than 62 million Hispanic people living in the United States, representing nearly 19% of the total population, according to Census Bureau estimates. The community is heavily affected by several cardiovascular risk factors, Luna said. Rates of diabetes, for example, are higher among Hispanic men, at 15.1%, and women, 14.1%, than their Black, white and Asian peers, according to AHA statistics.

Further educating patients about PAD and uncontrolled diabetes, which can lead to worse cases of PAD, may be one way to reduce these disparities, Luna said. Behavioral modifications such as getting regular exercise, cutting back on sugary foods and drinks, and being more vigilant about seeing medical professionals, may also help to mitigate these trends, she said.

Luna called for more research on the topic, including qualitative studies that may identify specific barriers.

Dr. Joshua Beckman, who was not involved in the research, said the study "advances our understanding of the impact of PAD in this patient group." Still, major questions remain, he said.

"Why are Hispanic patients more likely to undergo amputation? Are there specific treatments that may benefit Hispanic patients to reduce the need for amputation? Would standardization of care change these outcomes?" said Beckman, professor of medicine and director of vascular medicine at Vanderbilt University Medical Center in Nashville, Tennessee.

"Further investigation is needed, along with better prevention and care."