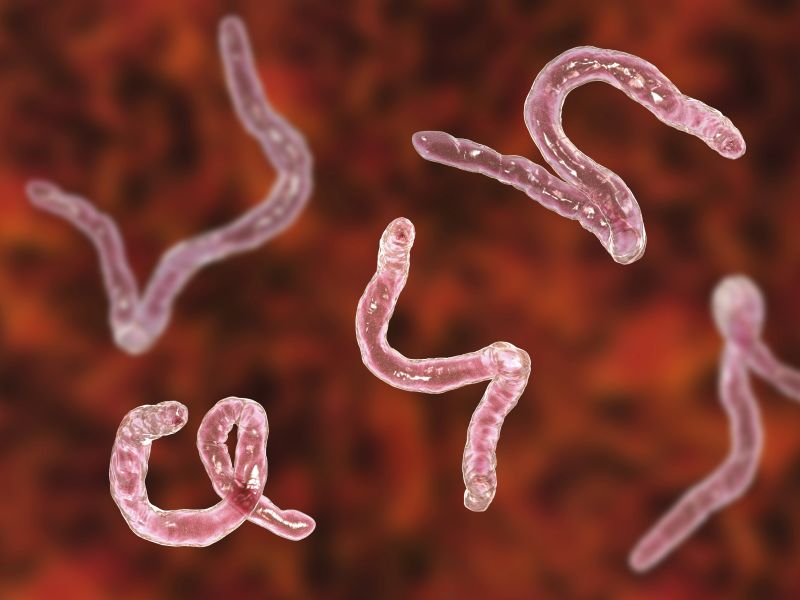 In a new trial there are hints, but no proof, that a wriggling intestinal parasite might help fight multiple sclerosis.

The lowly hookworm has for years been proposed as a potential treatment for multiple sclerosis (MS) and other autoimmune disorders.

But the first clinical trial testing the potential benefits of the parasite against MS has produced decidedly mixed results, according to the report published online June 15 in JAMA Neurology.

Hookworm treatment did not cause any decrease in the brain lesions associated with MS, compared with patients who received a placebo, the findings showed.

However, "there were some hints of a potential beneficial effect," said researcher Dr. Cris Constantinescu, a professor of clinical neuroscience at the University of Nottingham in the United Kingdom.

The group treated with hookworm experienced an increase in T regulatory cells, which balance the immune system and prevent autoimmune diseases, the researchers said.

"The immune response went in the direction that is good for MS treatment," Constantinescu said. "A larger trial would be needed, perhaps of a longer duration. Higher doses may have a more pronounced effect."

Multiple sclerosis occurs when the immune system starts attacking the central nervous system, damaging the fatty insulation that surrounds nerve fibers as well as the fibers themselves. Scars form on the brain and spinal cord, and people have problems moving and controlling their bodies.

The idea of treating MS with hookworms stems from the "hygiene hypothesis." This holds that folks these days are at increased risk of allergic and autoimmune conditions because the cleanliness of modern living prevents exposure to childhood illnesses and infections, said Dr. Daniel Ontaneda, a neurologist with the Cleveland Clinic.

For example, Constantinescu said that MS and other inflammatory disorders have increased in parts of the globe where hookworms and other gut parasites have been eliminated.

"Hookworms are gut parasites that have lived in the intestines of humans for thousands of years," Constantinescu said. "They have adapted to survive by preventing humans from mounting a very strong immune response against them. This in turn means that the immune response against hookworm does not damage the host's own tissue," he explained.

"The dampening of the immune response is through a variety of chemicals hookworms make," Constantinescu continued. "These chemicals can suppress inflammatory disorders, which is the main way in which hookworm can help treat MS."

Small studies have shown some potential benefit. To give the hookworm therapy its first serious road test, Constantinescu and his colleagues recruited 71 MS patients and randomly assigned them to either be treated with the parasites or with a placebo.

Hookworms penetrate the skin during their larval phase, then make their way to the gut where they can live for as long as five years, Constantinescu said.

For this study, hookworm larvae were placed on a gauze pad that was applied to patients' arms for at least a half hour. Patients assigned to the placebo group received a gauze pad dampened with purified water.

The patients were then tracked for nine months, to see if the hookworms would forestall the progress of scarring in their brains.

Disappointingly, MRIs revealed no significant difference between the brains of patients treated with hookworms and those who received the placebo treatment, the researchers said.

The negative result could be because the clinical trial was short or because it didn't have a large number of participants, Constantinescu said. It also could be because patients in the trial were suffering from milder MS.

Better news came with the second goal of the trial, to see if the hookworms helped calm MS patients' immune response. Those patients had increased numbers of T regulatory cells, a sign that hookworms can produce the sort of change that might help delay or halt the progression of MS, the study authors explained.

But overall the results indicate that "it's probably a pretty weak therapy, and it's probably not particularly effective," Ontaneda said.

The potential of hookworm particularly suffers in comparison to the strong and effective immune-modulating drugs now available to people with MS, Ontaneda said.

But Constantinescu still stands by hookworm therapy as something that could benefit some MS patients.

"Although the landscape of MS treatment has changed substantially in the last few years, and there are now several very potent disease-modifying treatments for MS, some populations with MS -- perhaps who have milder disease and prefer this approach -- may benefit," Constantinescu said.

The National Multiple Sclerosis Society has more about multiple sclerosis.