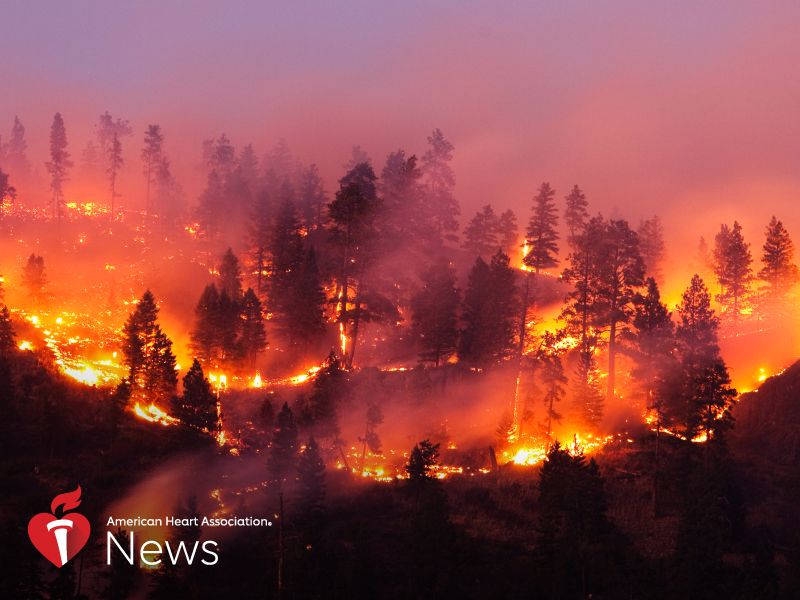 AHA News: Where There's Wildfire Smoke, There May Be Heart Problems

When the Tubbs Fire swept through their neighborhood in Santa Rosa, California, in October 2017, there was little time for Richard Grundy and Jamei Haswell to think about how all the smoke they were inhaling was impacting their health.

Trees already were burning when they pulled out of their driveway. Flames were consuming neighboring houses, ultimately destroying theirs as well. The couple took refuge in a hotel miles away from the fire, but burning ash rained down all around them.

"It was like being on another planet," said Haswell, who was 70 at the time. "We were probably walking around in some nasty stuff."

About a month later, Haswell's body swelled up with fluid. Doctors diagnosed her with heart failure, a condition she'd clearly had for some time. But Haswell wonders whether the wildfire smoke exposure worsened the problem.

According to Dr. Janki Shah, a cardiologist at UCLA Medical Center in Los Angeles, wildfire smoke is potentially hazardous and can exacerbate heart and lung conditions.

During last year's Woolsey Fire that swept through the Malibu hills, authorities asked Shah and her family to evacuate their Calabasas home. The neighborhood escaped destruction, but Shah and her family lived out of suitcases for days. Work was just as chaotic.

"The week after the fire was one of the busiest that I've had in the hospital with so many heart illnesses related to the fire," Shah said.

Dr. Zachary Wettstein, who now practices emergency medicine at the University of Washington School of Medicine, worked at the San Francisco VA Medical Center during the 2015 wildfire season, and he noticed an uptick in the number of patients seeking treatment for heart failure and chronic lung disease.

He investigated the matter with researchers from the California Department of Health and the Environmental Protection Agency. Their study, published last year in the Journal of the American Heart Association, looked at over 1 million emergency room visits across much of California during 2015. They found a link between wildfire smoke exposure and an increased risk of heart attacks, strokes, worsening heart failure and pulmonary emboli.

"Those associations were stronger when people were exposed to more intense smoke," Wettstein said. The risk was highest among people over 65.

Other studies also have discovered links between exposure to wildfire smoke and other forms of air pollution with respiratory diseases, such as asthma and chronic obstructive pulmonary disease, and even death.

Wildfire smoke is particularly dangerous because it contains not only harmful gases like carbon monoxide but also fine particulate matter, components small enough to travel into the lungs and the bloodstream. This can result in inflammation, blood clots and heart attacks.

"Wildfire smoke is associated with multiple effects on the body," Shah said, noting her normally mild case of asthma was exacerbated by the smoke from the Woolsey Fire. "It can cause an increase in stress hormone levels, which can increase blood pressure; it can affect the metabolism of glucose, lipids and insulin … . Exposure prevention is key."

The EPA's monitoring website, AirNow.gov, contains information about air quality, including levels of particulate matter. When conditions are poor, people - especially those with heart conditions - should reduce or eliminate outdoor physical activity. If leaving the house is unavoidable, the EPA suggests people wear N95 or P100 respirator masks, which are designed to filter small particles.

Given the evidence of a warming world with hotter, dryer summers and bigger, more intensely burning wildfires, Wettstein said more research is needed about the long-term and cumulative effects of exposure to wildfire smoke.

"That's a huge area to study, because more people in the country and around the world will be exposed to more wildfire smoke over longer periods of time," he said.

Grundy and Haswell briefly toyed with the idea of leaving Santa Rosa after the fire destroyed their home. But the way the community rallied around them convinced them to remain, and they quickly found a new home with magnificent mountain views.

Since then, there have been several other big fires in the area, including the one that destroyed Paradise in 2018. During that one, Haswell said, the smoke was so thick that it obscured their view almost entirely. "I had some flashbacks."