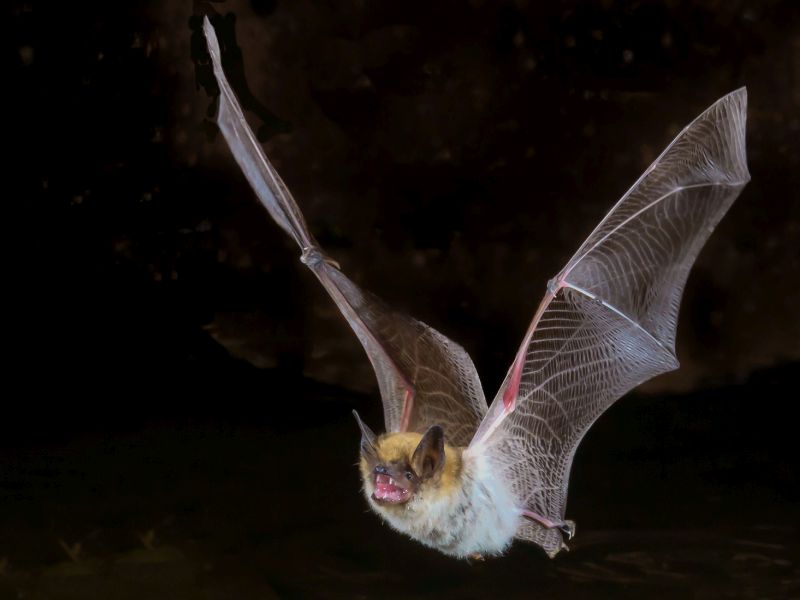 The first thing folks think about with rabies is four-legged critters -- dogs, raccoons, skunks or foxes.

But the most dangerous rabies threat you'll face right now is dangling overhead somewhere, waiting to flutter down and get entwined in your hair.

Bats are responsible for 7 out of 10 rabies deaths in the United States, according to the U.S. Centers for Disease Control and Prevention.

That number is striking because bats account for only a third of the 5,000 rabid animals reported each year nationwide, CDC researchers said.

The problem is that because people don't realize bats pose a rabies risk, they might fail to seek the lifesaving rabies vaccine and antiviral medications after they've been bitten or scratched.

A scratch or bite from a bat can be smaller than the top of a pencil eraser, but that's enough to give a person rabies, the CDC said.

"Initial symptoms of rabies may include a fever with pain or tingling, a burning or prickly sensation at the wound," said Dr. Robert Glatter, an emergency physician at Lenox Hill Hospital in New York City. "The virus spreads to the central nervous system, leading to subsequent inflammation of the brain and spinal cord."

Staying away from wildlife, especially bats, is key to preventing rabies in people. Rabies-carrying bats can be found in every U.S. state except Hawaii, and they can spread the potentially deadly virus year-round.

This doesn't mean it's open season on bats, which are vital to a healthy environment.

"Bats play a critical role in our ecosystem and it is important people know that most of the bats in the U.S. are not rabid," lead researcher Dr. Emily Pieracci, a CDC veterinarian, stressed in an agency news release. "The problem comes when people try to handle bats they think are healthy because you really can't tell if an animal has rabies just by looking at it."

If you wake up with a bat in your room, assume you might have been exposed to rabies, the CDC advises. See a doctor right away to find out if you need treatment.

Each year, public health officials in the United States respond to 175 mass bat exposures, events where more than 10 people are exposed to a potentially rabid bat.

In many ways, the threat posed by bats is a reflection of successful U.S. policies dealing with rabies, the CDC said.

Before 1960, dog bites caused most cases of rabies in humans. But mass pet vaccination programs and leash laws have significantly reduced rabies in dogs, shifting the main threat to bats and other wildlife.

"Mass dog vaccination programs started in the 1950s and by 2004, these programs had eliminated the type of rabies that normally circulates in dogs," Dr. Anne Schuchat, the CDC's principal deputy director, said in a Wednesday media briefing.

"Reducing rabies in dogs is a remarkable achievement of the U.S. public health system, but with this deadly disease still present in thousands of wild animals, it's important that Americans are aware of the risk," CDC Director Dr. Robert Redfield said in the release.

In fact, since the 1990s, three times more rabid cats have been reported in the United States than rabid dogs, Pieracci said in the briefing.

"Most people in the United States vaccinate their dogs, but oftentimes people don't vaccinate cats," she said. "Vaccinating cats is very important in case they have contact with wildlife inside or outside the home."

Overseas is another matter.

Globally, rabid dogs cause about 98% of the 59,000 human deaths from rabies that occur each year.

In fact, encounters with dogs while traveling overseas are the second-leading cause of rabies cases in Americans, the CDC said.

Imported dogs pose a risk as well. As many as 107,000 dogs a year are imported from countries where canine rabies is common. Since 2015, three rabid dogs are known to have been brought into the United States.

With routine pet vaccination and the availability of rabies-fighting vaccines and medications, very few U.S. human cases of rabies occur these days.

The United States averages one to three human rabies cases a year, down from between 30 and 50 cases in the 1940s.

About 55,000 Americans receive rabies treatment each year to prevent infection after being bitten or scratched, the CDC said. The shots are no longer given in the stomach, but in the upper arm, in four doses over two weeks.

"Rabies is 99% fatal if left untreated. At the same time, it is also 100% preventable of people receive post-exposure prophylaxis in a timely manner, and before symptoms develop," Glatter said.

The Nemours Foundation has more about rabies.