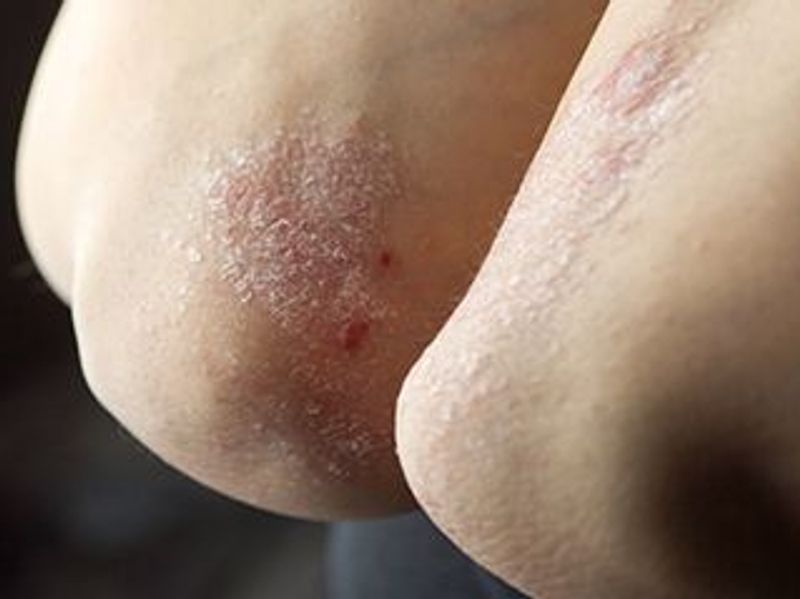 A breakthrough psoriasis drug is better at treating the itchy and painful skin disease than medicines already on the market, according to results from two clinical trials.

There was a "night and day difference" in the results from bimekizumab compared against two established psoriasis drugs, secukinumab (Cosentyx) and adalimumab (Humira), said Dr. Mark Lebwohl, a co-researcher in one of the clinical trials.

"We've never had a drug which in its phase 3 trials had more than 50% of patients achieve" a 100% reduction in their psoriasis symptoms, said Lebwohl, dean for clinical therapeutics at the Icahn School of Medicine at Mount Sinai in New York City.

"We're now at a point where we can clear the vast majority of psoriasis patients with medications that are very effective and very safe," he added.

Based on these results, Lebwohl expects the Belgian pharmaceutical company UCB Pharma to pursue quick approval of bimekizumab with the U.S. Food and Drug Administration.

"I would hope it would be on the market this summer," he said.

Psoriasis affects more than 8 million people in the United States, according to the National Psoriasis Foundation.

It's an autoimmune disease that speeds up skin cell growth, causing cells to pile up on the surface of the skin and form plaques that itch, burn and sting. These plaques can appear on any part of the body, but are most often found on the elbows, knees and scalp.

A pro-inflammatory biochemical called interleukin-17 (IL-17) has been implicated in the development of psoriasis, Lebwohl said. Secukinumab and adalimumab work by blocking the chemical's most potent form, called IL-17A.

Bimekizumab blocks both IL-17A and another form of the chemical called IL-17F, Lebwohl said. The injectable drug is administered once a month.

"The biology [of the two forms of IL-17] is overlapping -- 17A is more potent but 17F is more abundant," Lebwohl said. "Even though 17A is stronger at causing psoriasis, there is more of 17F. By blocking both, you get the full effect."

After 48 weeks of treatment, about 67% of bimekizumab patients had complete clearing of their psoriasis plaques, compared with 46% of patients receiving secukinumab, according to results of the trial that Lebwohl co-authored. A total 743 patients participated.

The other clinical trial, involving 478 patients, offered similar results. After 16 weeks, 86% of patients on bimekizumab had experienced a 90% reduction in their psoriasis plaques, nearly double the 47% who achieved the same response with adalimumab.

"They block IL-17A, while this blocks both IL-17A and IL-17F," Lebwohl said. "That's probably why it's so effective. Blocking that extra little bit of IL-17 actually gets you the added effectiveness."

Bimekizumab also has been shown to effectively treat psoriatic arthritis, a condition that affects 1 in 3 people with psoriasis, Lebwohl said.

People taking bimekizumab were four to 10 times more likely to have a reduction in their arthritis symptoms than a placebo group, with the response growing with the size of the dose, according to results published in The Lancet.

Blocking IL-17 does cause a greater risk of yeast infections, and the risk is stronger with bimekizumab than the other two drugs, results showed.

"Nature has done an experiment for us by giving us people who are deficient in IL-17, and they get awful yeast infections," Lebwohl said. "We anticipated before the study is that the only side effect we'd see was yeast infections, and that's what happened."

The mild to moderate cases of yeast infection that occurred in the clinical trials were "easily treated with fluconazole," an oral anti-fungal drug, Lebwohl said.

"This is an impressive study showing significant results using an interleukin-17 inhibitor to treat plaque psoriasis," she said.

However, Green sounded a note of caution, urging further study of the drug.

"A larger sample size needs to be used since in addition to candidiasis, interleukin inhibitors have been associated with higher rates of other opportunistic infections, severe infections and cancer," Green said.

The clinical trial results were published April 23 in the New England Journal of Medicine, and also were presented at an online meeting of the American Academy of Dermatology.

The National Psoriasis Foundation has more about psoriasis.