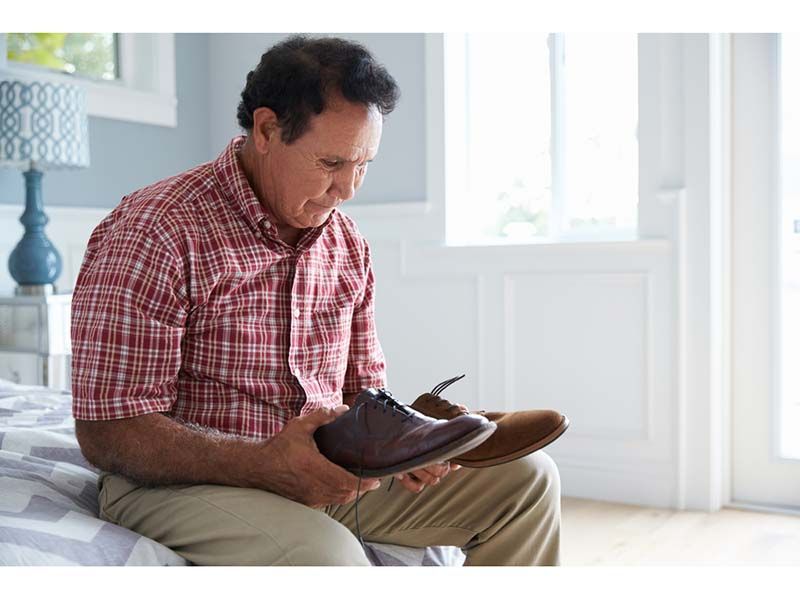 Lots of Americans suffer from painful arthritic knees, but a new study finds that wearing the right type of shoe may help ease discomfort.

Patients with knee arthritis will achieve greater pain relief by opting for sturdy and supportive shoes rather than flat flexible footwear, researchers in Australia found.

"A 'sturdy supportive shoe' is a shoe that gives stability to the foot, via motion control features such as arch support," explained study author Rana Hinman, a professor of physiotherapy at the University of Melbourne. "It also has a thick, cushioned heel and a rigid sole that does not bend easily."

In contrast, Hinman noted, "a 'flat flexible shoe' is more lightweight, contains no arch support or motion control features, has a low heel (i.e., flat) with minimal/no cushioning and has a flexible sole that bends easily."

Roughly 1 in 4 adults over the age of 45 has arthritic knees, Hinman noted.

One U.S. expert unconnected to the study agreed that "bum knees" will probably feel better with special footwear.

"I think it's pretty intuitive that a structured shoe will be more stable and better for arthritis patients," said Dr. Jeffrey Schildhorn, an orthopedic surgeon at Lenox Hill Hospital in New York City. "I've found that to be true in my practice and in my life. But this study is the first to really look at this in a rigorous way, and to show with good science that this isn't just anecdotal."

As the Australian team noted, people with creaky, painful knees are often advised to wear shoes with support. But there's also a school of thought that flat flexible shoes may deliver greater benefit because they provide more of a "barefoot" experience.

The latter theory didn't win out in the new study. After working with 164 knee arthritis patients in the Melbourne area, Hinman's team found that "58% of people who wore sturdy supportive shoes experienced a meaningful reduction in knee pain on walking, compared to only 40% of the people who wore flat flexible shoes."

Study participants were 50 years old and older. Prior to the study's launch, all had experienced near constant knee pain in the prior month (rated at a 4 or greater on a pain scale of 11), and most had worn shoes that featured a mix of sturdy and flat characteristics.

Between 2017 and 2019, half were randomly assigned to wear a flat flexible shoe for at least six hours a day over six months, while the other half was assigned stable supportive footwear. (The team did not compare shoes distributed in the study with the ones patients regularly wore.)

In the end, the team determined that while stable supportive shoes did not restore greater mobility to patients than flat flexible shoes, they did offer a leg up on knee and hip pain reduction and improved quality of life.

'A Rolls-Royce over potholes'

"For someone with knee arthritis," he said, "a structured shoe is almost like a Rolls-Royce going over potholes. Because the problem with an arthritic knee is that the joints aren't aligned correctly, and aren't nearly as supple anymore. And it has cartilage with gaps, like cobblestones, which wear away."

A structured shoe can absorb those issues, said Schildhorn. But an unstructured shoe or a bare foot "relies on all of the joints of the body to work just as they were designed. They all have to be aligned correctly, the ligaments have to be functional, and the joints have to be supple in order to absorb loads when walking in uneven areas. Because you need your body to be able to adjust to variances."

The U.S.-based Arthritis Foundation agrees that patients should pay attention to the style and fit of the shoes they wear. But it cites mixed findings as to best practices.

For example, foundation experts acknowledge that stable shoes and boots (without heels) can indeed be helpful for some.

However, they also highlight prior knee research indicating that some flat shoes -- such as flip-flops -- may trigger less knee stress than more stable shoes. Others, however, such as loosely strapped sandals and so-called "foot gloves," may prove problematic.

But the foundation has one piece of overriding advice: Never favor style over function and comfort.

The results were published Jan. 11 in the Annals of Internal Medicine.

There's more on shoe wear and arthritis at the Arthritis Foundation.