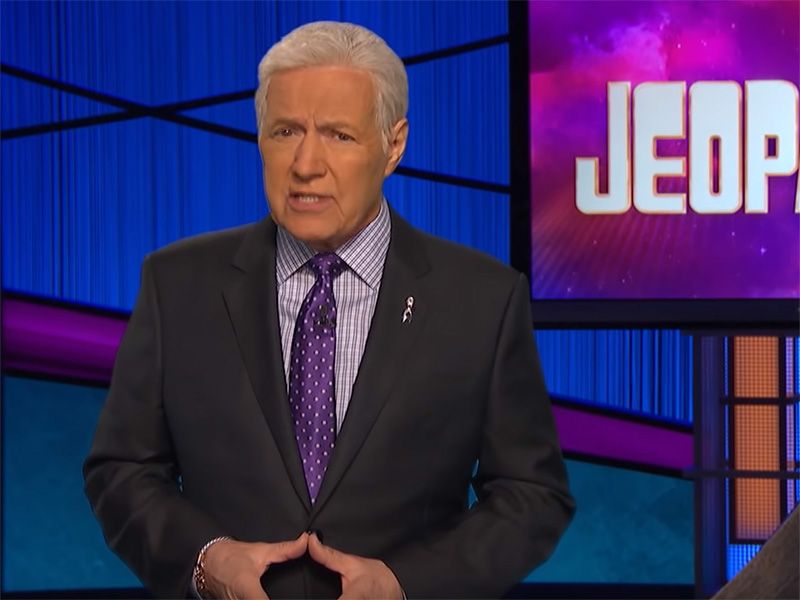 Alex Trebek, beloved by millions as the calm, authoritative host of 'Jeopardy!' for a record-setting 37 years, died Sunday after a long battle with pancreatic cancer.

Trebek's death at age 80 was confirmed by the show's producers, The New York Times said. The show will continue to air episodes he hosted until Christmas, they added, and a replacement host has not yet been named.

It's been a rocky road for Trebek since he first announced his diagnosis in March of 2019.

Two months later, he and his doctors announced that he appeared to be winning his battle against the disease.

"It's kind of mind-boggling," Trebek told People at the time. Even though the overall survival rate for pancreatic cancer is just 9%, Trebek responded well to chemotherapy.

"The doctors said they hadn't seen this kind of positive result in their memory -- some of the tumors have already shrunk by more than 50%," he told the magazine.

In late August 2019, Trebek seemed to be doing so well that he returned to taping the 35th season of "Jeopardy!"

But his health again took a turn for the worse.

"Yup, [I] went all the way down to numbers that correspond with a normal human being without cancer," he told the Canadian television network CTV at the time. "[But] then all of a sudden, it blew up and went 50% higher than when it was first diagnosed. Go figure."

So, Trebek resumed chemotherapy in September 2019.

He beat the one-year survival rate for stage 4 pancreatic cancer patients in March, which stands at only 18%, CBS News reported.

In a video issued at the time, Trebek was candid about the struggle he was having as he continued to host 'Jeopardy" while enduring chemo treatments.

"There were moments of great pain," he said, "days when certain bodily functions no longer functioned and sudden, massive attacks of great depression that made me wonder if it really was worth fighting on."

In a health update to fans in July, he said he was "doing well.I've been continuing my treatment and it is paying off, though it does fatigue me a great deal. My numbers are good. I'm feeling great."

Trebek also took the opportunity to tell fans that he had written a book, titled The Answer Is… Reflections on My Life. He also announced plans to return to the studio to film new episodes of 'Jeopardy!' in September. The show's filming had been in hiatus during the coronavirus pandemic.

Back in October of 2019, Trebek partnered with the World Pancreatic Cancer Coalition to issue a public service announcement aimed at heightening awareness of the killer disease.

The aim was to "help raise global awareness of the risks and symptoms of pancreatic cancer," Trebek said at the time.

"I wish I had known sooner that the persistent stomach pain I experienced prior to my diagnosis was a symptom of pancreatic cancer," he noted in the one-minute video. "Other common symptoms can include mid-back pain, unexplained weight loss, new-onset diabetes and the yellowing of the skin or eyes."

Trebek had credited the warmth and support of fans for any inroads he had made against the cancer.

"I've got a couple million people out there who have expressed their good thoughts, their positive energy directed towards me and their prayers," he told People. "I told the doctors, this has to be more than just the chemo, and they agreed it could very well be an important part of this."

Because it is so often symptomless until it reaches an advanced stage, pancreatic cancer has a high fatality rate. According to the American Cancer Society, about 57,600 Americans will be diagnosed with the disease in 2020, and the illness is expected to claim over 47,000 lives.

In addition, pancreatic tumors are particularly aggressive "due to a mutational profile that makes it resistant to therapies that work better for other tumor types," explained Dr. Angela Alistar. She directs gastrointestinal medical oncology at Morristown Medical Center, in Morristown, N.J.

Trebek had been philosophical about his chances, and had said death didn't frighten him.

"I'm not afraid of dying," the 79-year-old told CTV. "I've lived a good life, a full life, and I'm nearing the end of that life -- if it happens, why should I be afraid of that? One thing they're not going to say at my funeral, as a part of a eulogy, is 'He was taken from us too soon.'"

His calm, steady charm helped make 'Jeopardy!' one of the most popular U.S. game shows ever. According to the Times, the show has garnered 35 Emmy Awards -- a record for a game show. Trebek hosted his 8000th episode of 'Jeopardy!' in 2014, surpassing a record set by Bob Barker who had hosted The Price Is Right for 6,828 episodes from 1972 to 2007.

As Trebek told the Times, he believed the host should not be a game show's "star."

"You have to set your ego aside," Mr. Trebek said. "If you want to be a good host, you have to figure out a way to get the contestants to -- as in the old television commercial about the military -- 'be all you can be.' Because if they do well, the show does well. And if the show does well, by association, I do well."

Trebek had also been a spokesperson for charities such as World Vision and Smile Train, and had entertained troops on numerous USO tours.

Trebek married twice -- to Elaine Callei in 1974 (the marriage lasted seven years) and then to Jean Currivan in 1990, with whom he has two children, Emily and Matthew.

Visit the American Cancer Society for more about pancreatic cancer.